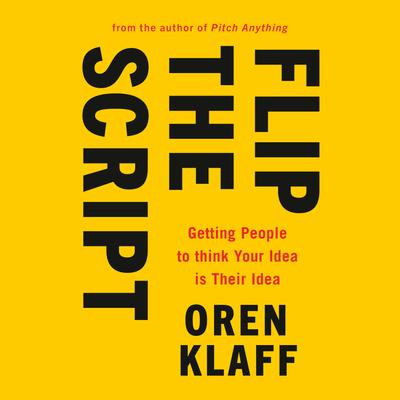 Getting People to Think Your Idea Is Their Idea

THE BESTSELLING AUTHOR OF PITCH ANYTHING IS BACK TO FLIP YOUR ENTIRE APPROACH TO PERSUASION.

Is there anything worse than a high-pressure salesperson pushing you to say "yes" (then sign on the dotted line) before you're ready?

If there's one lesson Oren Klaff has learned over decades of pitching, presenting, and closing long-shot, high-stakes deals, it's that people are sick of being marketed and sold to. Most of all, they hate being told what to think. The more you push them, the more they resist.

What people love, however, is coming up with a great idea on their own, even if it's the idea you were guiding them to have all along. Often, the only way to get someone to sign is to make them feel like they're smarter than you.

That's why Oren is throwing out the old playbook on persuasion. Instead, he'll show you a new approach that works on this simple insight: Everyone trusts their own ideas. If, rather than pushing your idea on your buyer, you can guide them to discover it on their own, they'll believe it, trust it, and get excited about it. Then they'll buy in and feel good about the chance to work with you.

That might sound easier said than done, but Oren has taught thousands of people how to do it with a series of simple steps that anyone can follow in any situation.

And as you'll see in this book, Oren has been in a lot of different situations.

He'll show you how he got a billionaire to take him seriously, how he got a venture capital firm to cough up capital, and how he made a skeptical Swiss banker see him as an expert in banking. He'll even show you how to become so compelling that buyers are even more attracted to you than to your product.

These days, it's not enough to make a great pitch.

To get attention, create trust, and close the deal, you need to flip the script.