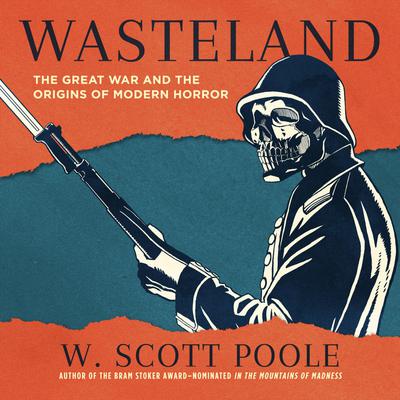 The Great War and the Origins of Modern Horror

“Wasteland is as breathtaking as it is sensitive. The backdrop of bloodshed that is the Great War is almost its own character in Poole’s writing. The early lives and war experiences of each man lend themselves so well to the dissection of the works produced by those who returned but never really came back. Poole’s latest is dead on with sharp analysis and drinkable prose as he illustrates the hunger for horror, the almost compulsive need to relive and re-experience the trauma, and the irrevocable mark on the landscape of our psychology and pop culture.”

In the early twentieth century, World War I was the most devastating event humanity had yet experienced. New machines of war left tens of millions killed or wounded in the most grotesque of ways. The Great War remade the world's map, created new global powers, and brought forth some of the biggest problems still facing us today. But it also birthed a new art form: the horror film, made from the fears of a generation ruined by war.

From Nosferatu to Frankenstein's monster and the Wolf Man, from Fritz Lang, F. W. Murnau, and Albin Grau to Tod Browning and James Whale, the touchstones of horror can all trace their roots to the bloodshed of the First World War. Historian W. Scott Poole chronicles these major figures and the many movements they influenced. Wasteland reveals how bloody battlefields, the fear of the corpse, and a growing darkness made their way into the deepest corners of our psyche.

On the one-hundredth anniversary of the signing of the armistice that brought World War I to a close, W. Scott Poole takes us behind the front lines of battle to a no-man's-land where the legacy of the War to End All Wars lives on.

Notice to our customers about Wasteland