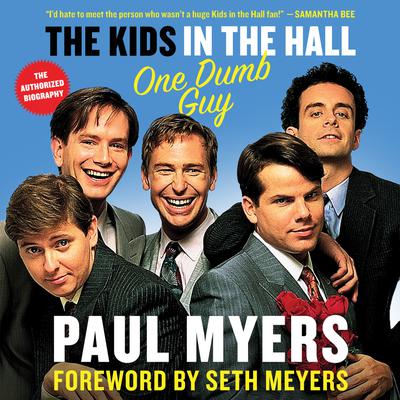 The Kids in the Hall

The Kids in the Hall

“I could have an entire conversation using only KITH quotes so when I saw that there was a KITH book on Libro.fm I jumped! It is everything I hoped it would be, stories about each of the Kids growing up and then them meeting and forming. Loads of behind the scenes looks at the most famous sketches and characters. A sprinkling of commentary of their place in the industry and and honest look at some of their failures. One Dumb Guy is a perfect gift for the Chicken Lady fan in your life. It is, as Bruce would say, A pretty sweet fruit.”

It's finally here—the definitive, authorized story of legendary sketch comedy troupe The Kids in the Hall. Meticulously researched and written with the full cooperation and participation of the Kids by critically acclaimed biographer and comedy aficionado Paul Myers, The Kids in the Hall: One Dumb Guy features exclusive interviews with Dave Foley, Bruce McCulloch, Kevin McDonald, Mark McKinney, and Scott Thompson, as well as key players from their inner circle, including producer Lorne Michaels. Marvel as the Kids share their intimate memories and behind-the-scenes stories of how they created their greatest sketches and most beloved characters, from the Chicken Lady and Buddy Cole to Cabbage Head and Sir Simon & Hecubus. The Kids in the Hall: One Dumb Guy spans the entirety of the Kids' storied career, from their early club shows in Toronto to their recent live reunion tours across North America—and everything in between. Along for the ride are a plethora of fans, peers, and luminaries to celebrate the career and legacy of Canada's most subversively hilarious comedy troupe. You'll hear tributes from Seth Meyers, Judd Apatow, Garry Shandling, Paul Feig, Mike Myers, David Cross, Michael Ian Black, Brent Butt, Jonah Ray, Dana Gould, Bob Odenkirk, Andy Richter, and Canada's newest comedy sensation, Baroness Von Sketch.