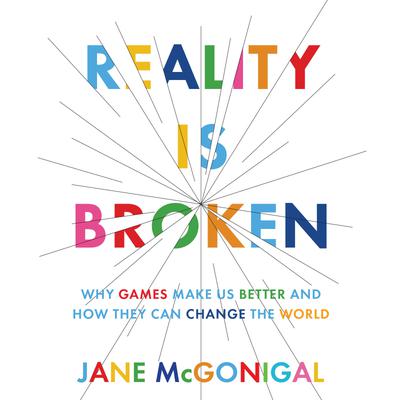 More than 174 million Americans are gamers, and the average young person in the U.S. will spend 10,000 hours gaming by the age of 21. According to world-renowned game designer Jane McGonigal, the reason for this mass exodus to virtual worlds is that videogames are increasingly fulfilling genuine human needs. In this groundbreaking exploration of the power and future of gaming, McGonigal reveals how we can use the lessons of game design to fix what is wrong with the real world. Drawing on positive psychology, cognitive science, and sociology, Reality is Broken uncovers how game designers have hit on core truths about what makes us happy and utilized these discoveries to astonishing effect in virtual environments. Videogames consistently provide the exhilarating rewards, stimulating challenges, and epic victories that are so often lacking in the real world. But why, McGonigal asks, should we use the power of games for escapist entertainment alone? Her research suggests that gamers are expert problem-solvers and collaborators because they regularly cooperate with other players to overcome daunting virtual challenges, and she helped pioneer a fast-growing genre of games that aims to turn game-play to socially positive ends.

In Reality is Broken, she reveals how these new alternate reality games are already improving the quality of our daily lives, fighting social problems such as depression and obesity, and addressing vital 21st-century challenges—and she forecasts the thrilling possibilities that lie ahead.

"As addictive as Tetris, McGonigal's penetrating, entertaining look into gaming culture is a vibrant mix of technology, psychology, and sociology, told with the vision of a futurist and the deft touch of a storyteller." —Publishers Weekly (starred review)