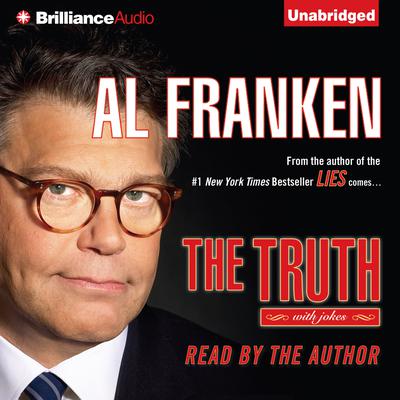 The Truth (with jokes)

Al Franken's landmark bestseller, Lies, and the Lying Liars Who Tell Them…a Fair and Balanced Look at the Right, was praised as a "bitterly funny assault" (The New York Times) that rang "with the moral clarity of an angel's trumpet" (Associated Press). Now, this master of political humor strikes again with a powerful and provocative message for all Americans.

Because after Lies, comes The Truth….

Al reveals the alarming story of how:
• Bush (barely) beat Kerry with his campaign of "fear, smear, and queers," and then claimed a nonexistent mandate
• Republicans decided that Terri Schiavo would make "a great political issue"
• Conservatives sought to undermine Social Security by using a strategy borrowed from… Vladimir Lenin
• Tom DeLay is just an absolute horror show

This is truly an audiobook for everyone.

If you were a Bush voter, Al wants to set aside partisan bitterness and talk about the better future Americans can build together for their children, grandchildren, and great-grandchildren. (Generations beyond that will have to fend for themselves.) But first, Al must show you how Republican leaders are, at this very moment, betraying your trust and quite possibly lighting a Cuban cigar with a burning American flag or Bible.

If you're a liberal, this audiobook is for you as well. Maybe even most of all. You will find evidence for what you already believe: that Al Franken is among America's finest prose stylists, and that the depravity of the Bush administration is only outmatched by the rot in the heart of the Republican Congress.

And finally, if you are a member of a future generation who has found this audiobook in a pile of radioactive rubble, Al apologizes. Not because he didn't do his best to control the proliferation of nuclear weapons from rogue nations to non-state actors taking refuge in so-called "failed" states. But because his countrymen evidently failed to listen.

In any case, enjoy the audiobook.