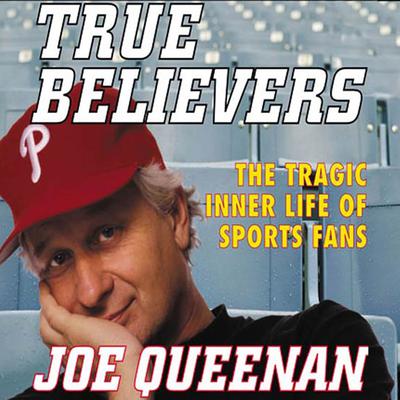 Bestselling author Queenan explores the world of sports fans in an attempt to understand the inexplicable: What does anyone get out of it?

For Yankee, Cowboy, and Laker fans the answer is fairly clear: the return on investment is relatively high. But why do people root so passionately for tragically inept squads like the Boston Red Sox, the Chicago Cubs, and the Philadelphia Phillies? Why do people organize their emotional lives around lackluster franchises such as the Cleveland Cavaliers, the San Diego Padres, and the Phoenix Suns, none of whom have ever won a single championship in their entire history? Is it pure tribalism? An attempt to maintain contact with one's vanished childhood?

In True Believers, humorist and lifelong Philly fan Joe Queenan answers these and many other questions, shedding light on--and reveling in--the culture and psychology of his countless fellow fans. Making pilgrimages to such cradles of competition as Notre Dame Stadium, Fenway, and Wrigley Field, Queenan delves into every aspect of fandom in such illuminating chapters as Fans Who Love Too Much (men, like the author, who actually resort to psychotherapy to deal with their unhealthy addiction), Fans Who Run in Front (the dreaded front runners), and Fans Who Misbehave (of the beer-spilling, mooning, and food-throwing varieties).

True Believers is a hilarious but also heartfelt look into the world of those fans who realize that it is, in fact, more than just a game.