“This is an audio experience. Malcolm Gladwell talks about it a bit in the beginning. He chose to use audio recordings of interviews, etc., wherever available instead of just reading the quotes himself. There’s music spattered throughout. It’s kind of a book/podcast. It is not just a direct reading of the text. Also, Malcolm Gladwell has a soothing voice but covers some unsettling topics, so you can definitely listen to this one and not fall asleep. I won’t say I enjoyed this book, because how can you enjoy something that talks about all the unpleasant side effects of misinterpreting interactions with strangers? But it was incredibly interesting. We hear about what went wrong with Amanda Knox, the Brock Turner trial, and Sandra Bland, amidst many other examples. I love books like this that examine psychology through real life things. I definitely feel like I learned something from Talking to Strangers, and for me, that’s really the best way to judge a nonfiction title.”

“Talking To Strangers is perfect on audio. It reads (listens) like a podcast including audio clips from interviews, etc.”

“In TALKING TO STRANGERS, Gladwell examines how communication is the key to basically everything. With historical as well as current case studies, this book makes you examine your prejudices and preconceived notions. This is not your typical audiobook. Gladwell uses original clips from news stories, segments from other audio books, and he even has a theme song for this book. This listens like a tightly orchestrated podcast and it is a fabulous way to consume this book. Highly recommend.”

“Instead of reading this important book outright, Gladwell uses a podcast-style format to really engage the listener. Thoroughly engaging, interesting, and enlightening, audio is definitely an excellent way to read this book.”

“If you're thinking about giving audiobooks a try, I highly recommend starting off your audiobook experience with Malcolm Gladwell's Talking to Strangers. I just finished this last night and love the work Gladwell put into the production of it, and of course Gladwell delivers, as always, an in-depth analysis of a topic that will flip your worldview.”

“I have always considered myself to be a very open-minded person. But Malcolm Gladwell's "Talking to Strangers" is a revelation in the mistakes we humans make in interpreting each other's motives and intentions. The common assumptions that we make in order to navigate daily life often lead us to grossly err in our decisions and judgments concerning others. When we seek to determine whether someone is lying, whether they've committed a crime, or if we can trust a stranger--we use faulty tools. Gladwell helps us to see and understand this phenomenon using stories from recent events such as the trials of Bernie Madoff, Amanda Knox, and the rape case of Brock Turner and Emily Doe. I can't wait to share and discuss this book with my friends and family.”

“Gladwell's synthesis of famous news clips, infamous moments in history, and a collection of behavioral studies is uncannily fascinating. I found myself at turns nodding along with his points and shaking my head incredulously. While I was reading, I would over-analyze conversations and encounters I had with strangers, and then laugh at myself for being so paranoid. I rose to the enraged defense of the victims of violent crimes he recounted in the book and was horrified to find myself possibly trying to understand with some of the behaviors of the perpetrators. In the end, I'm not sure I agree with everything Gladwell discussed. But then again, I don't think he set out to convince anyone of any particular thing. His goal was to answer what could have happened in the case of Sandra Bland and to peel back the layers to expose human behaviors and assumptions that could have possibly played a role in the incident. This was the first book by Gladwell that I've read and I look forward to exploring more of his work. This audiobook was particularly interesting. Gladwell narrated but integrated interview clips, news sound bites, and actor reenactments throughout the audio. At first jarring and a little worrisome, because I thought I wasn't going to understand the clips due to audio quality, it was an addition that I found myself enjoying and really added depth to the book's thematic goals. I definitely recommend this book! Especially the audiobook version.”

“Fascinating! How and why we so frequently misinterpret the words, intentions, and sincerity of strangers. Computers, analyzing only information, are far better at judging someone’s guilt or innocence (and future behavior) than judges, psychologists, and witnesses. Based on our preconceptions of how people should behave in certain situations, the guilty often appear innocent and the innocent look like cold-hearted liars. They’re mismatched. Their outer reactions, facial expressions, and behavior don’t match our socially biased expectations. But wait, how do culture, alcohol, or surroundings further muck up our interactions? That’s just the tip of this Gladwellian iceberg.”

A Best Book of the Year: The Financial Times, Bloomberg, Chicago Tribune, and Detroit Free Pres
Malcolm Gladwell, host of the podcast Revisionist History and author of the #1 New York Times bestseller Outliers, offers a powerful examination of our interactions with strangers -- and why they often go wrong.
How did Fidel Castro fool the CIA for a generation? Why did Neville Chamberlain think he could trust Adolf Hitler? Why are campus sexual assaults on the rise? Do television sitcoms teach us something about the way we relate to each other that isn't true?
While tackling these questions, Malcolm Gladwell was not solely writing a book for the page. He was also producing for the ear. In the audiobook version of Talking to Strangers, you'll hear the voices of people he interviewed--scientists, criminologists, military psychologists. Court transcripts are brought to life with re-enactments. You actually hear the contentious arrest of Sandra Bland by the side of the road in Texas. As Gladwell revisits the deceptions of Bernie Madoff, the trial of Amanda Knox, and the suicide of Sylvia Plath, you hear directly from many of the players in these real-life tragedies. There's even a theme song - Janelle Monae's "Hell You Talmbout."
Something is very wrong, Gladwell argues, with the tools and strategies we use to make sense of people we don't know. And because we don't know how to talk to strangers, we are inviting conflict and misunderstanding in ways that have a profound effect on our lives and our world.

Malcolm Gladwell is the author of five New York Times bestsellers--The Tipping Point, Blink,Outliers, What the Dog Saw, and David and Goliath. He is also the co-founder of Pushkin Industries, an audio content company that produces the podcasts Revisionist History, which reconsiders things both overlooked and misunderstood, and Broken Record, where he, Rick Rubin, and Bruce Headlam interview musicians across a wide range of genres. Gladwell has been included in the TIME 100 Most Influential People list and touted as one of Foreign Policy's Top Global Thinkers.

Malcolm Gladwell is the author of five New York Times bestsellers--The Tipping Point, Blink,Outliers, What the Dog Saw, and David and Goliath. He is also the co-founder of Pushkin Industries, an audio content company that produces the podcasts Revisionist History, which reconsiders things both overlooked and misunderstood, and Broken Record, where he, Rick Rubin, and Bruce Headlam interview musicians across a wide range of genres. Gladwell has been included in the TIME 100 Most Influential People list and touted as one of Foreign Policy's Top Global Thinkers. 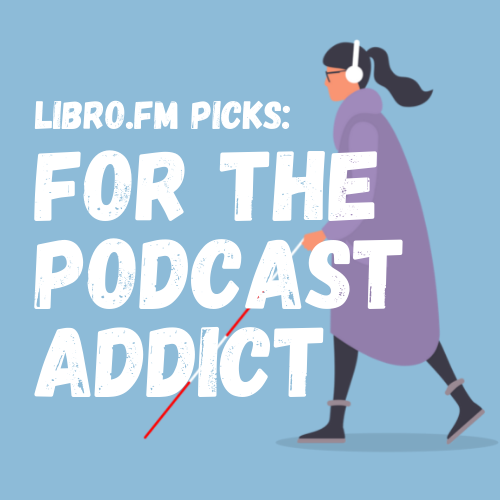 Libro.fm Picks: For the Podcast Addict 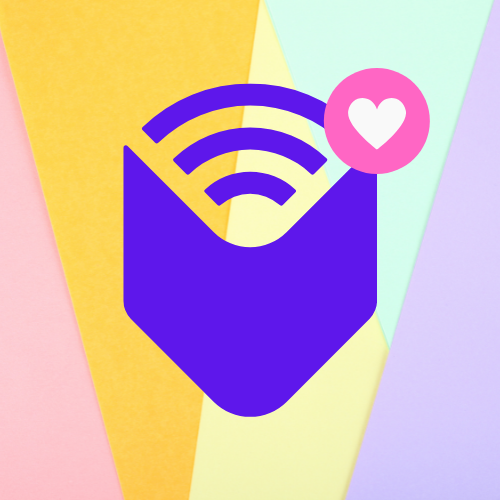 "Inspiring and motivating...Gladwell is a wunderkind and a saint...He takes on racial division, incompatible perspectives, and emotional dissonance without ever sounding preaching or proud. The stories make you think."—John Brandon, Daily Beast "Mr. Gladwell's towering success rests on the moment when the skeptic starts to think that maybe we're wrong about everything and maybe, just maybe, this Gladwell guy is onto something...Talking to Strangers is weightier than his previous titles."—Amy Chozick, New York Times "Gladwell uses compelling real-world examples to show the how and why behind our interactions with folks we're trying to understand."
—Rhett Power, Forbes "Gladwell's case studies are thrilling...Chock-full of gripping anecdotes from the recent and forgotten past. He uses these riveting stories to offer up bite-size observations about how we engage with strangers."—Maggie Taft, Booklist "Engaging...Mr. Gladwell [presents] a mountain of quirky anecdotes and interesting research about our blunders with strangers, and why we make them...It's fascinating to peek at these incidents through Mr. Gladwell's psychological lens."—Leigh Anne Focareta, Pittsburgh Post-Gazette "Another Gladwell tour de force...intellectually stimulating...Readers expecting another everything-you-think-you-know-is-wrong page-turner will not be disappointed."—Kirkus Reviews (starred review) "Talking to Strangers is a must-read...I love this book... Reading it will actually change not just how you see strangers, but how you look at yourself, the news--the world...Reading this book changed me."—Oprah Winfrey, O, The Oprah Magazine "Both fascinating and topical...A thoughtful treatise...Gladwell writes in his signature colorful, fluid, and accessible prose."—Publishers Weekly "Gladwell interviews brilliant people, generates powerful insights, writes like an angel, and has earned a massive and admiring audience. He has a keen eye and a witty flair and he's one of the best observationalists of a generation. Gladwell is a big-picture thinker who helps us make sense of the human condition."—Bob Brisco, WebMD Magazine "Powerful advice on truly getting to know others...Gladwell brilliantly argues that we should stop assuming, realize no one's transparent and understand that behavior is tied to unseen circumstances."—People, Book of the Week "Superb writing. Masterful structure."—Pilita Clark, Financial Times (UK) "Gladwell has again delivered a compelling, conversation-starting read...At a time when the world feels intractably polarized, a book examining the varying ways we misinterpret or fail to communicate with one another could not feel more necessary...With a mix of reporting, research and a deft narrative hand, Gladwell illuminates these examples with the page-turning urgency of a paperback thriller."—Chris Barton, Los Angeles Times "As always, with his narrative gift and eye for the telling detail, Gladwell peppers his work with unforgettable facts... He has immense gifts--a probing, original, questioning mind, an ability to dig up information others haven't considered and tie it to a broader point. He has a narrative skill nonpareil."—Stephen Galloway, Hollywood Reporter Expand reviews 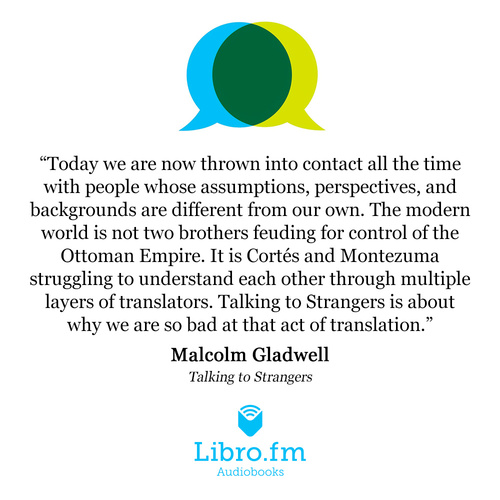 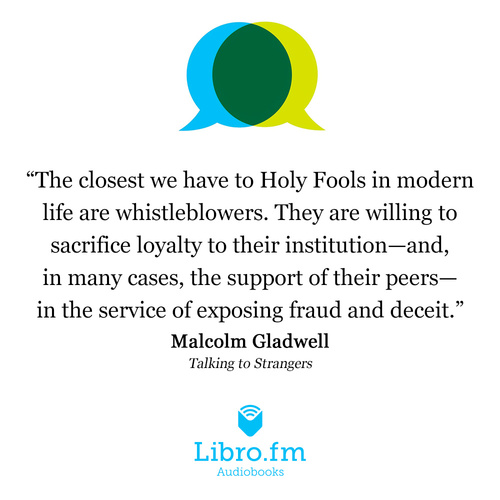 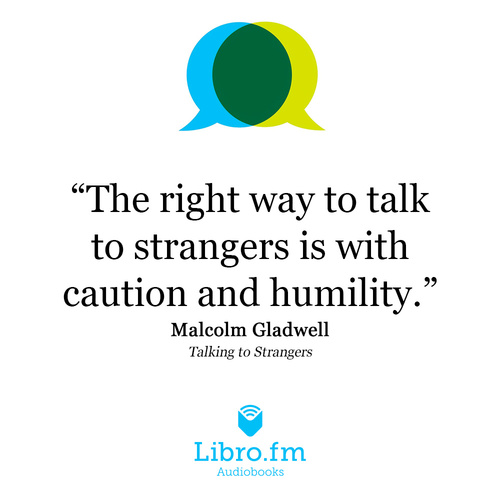