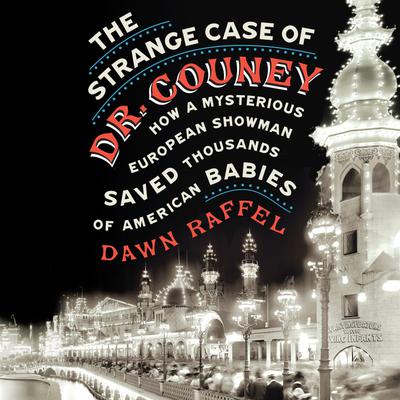 The Strange Case of Dr. Couney

How a Mysterious European Showman Saved Thousands of American Babies

"A mosaic mystery told in vignettes, cliffhangers, curious asides, and some surreal plot twists as Raffel investigates the secrets of the man who changed infant care in America.... It's a fascinating historical footnote, compassionately told." --NPR

What kind of doctor puts his patients on display?

This is the spellbinding tale of a mysterious doctor who revolutionized neonatal care more than one hundred years ago and saved some seven thousand babies. Dr. Martin Couney's story is a kaleidoscopic ride through the intersection of ebullient entrepreneurship, enlightened pediatric care, and the wild culture of world's fairs at the beginning of the American Century.

As Dawn Raffel recounts, Dr. Couney used incubators and careful nursing to keep previously doomed infants alive, while displaying these babies alongside sword swallowers, bearded ladies, and burlesque shows at Coney Island, Atlantic City, and venues across the nation. How this turn-of-the-twentieth-century émigré became the savior to families with premature infants--known then as "weaklings"--as he ignored the scorn of the medical establishment and fought the rising popularity of eugenics is one of the most astounding stories of modern medicine. Dr. Couney, for all his entrepreneurial gusto, is a surprisingly appealing character, someone who genuinely cared for the well-being of his tiny patients. But he had something to hide...

Drawing on historical documents, original reportage, and interviews with surviving patients, Dawn Raffel tells the marvelously eccentric story of Couney's mysterious carnival career, his larger-than-life personality, and his unprecedented success as the savior of the fragile wonders that are tiny, tiny babies.