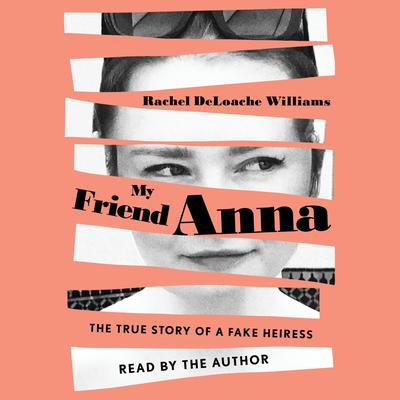 The True Story of a Fake Heiress

ONE OF TIME’S 100 BEST BOOKS OF THE YEAR

Sex and the City meets Catch Me if You Can in the astonishing true story of Anna Delvey, a young con artist posing as a German heiress in New York City—as told by the former Vanity Fair photo editor who got seduced by her friendship and then scammed out of more than $62,000.

When Anna proposed an all-expenses-paid trip to Marrakech at the five-star La Mamounia hotel, Rachel jumped at the chance. But when Anna’s credit cards mysteriously stopped working, the dream vacation quickly took a dark turn. Anna asked Rachel to begin fronting costs—first for flights, then meals and shopping, and, finally, for their $7,500-per-night private villa. Before Rachel knew it, more than $62,000 had been charged to her credit cards. Anna swore she would reimburse Rachel the moment they returned to New York.

Back in Manhattan, the repayment never materialized, and a shocking pattern of deception emerged. Rachel learned that Anna had left a trail of deceit—and unpaid bills—wherever she’d been. Mortified, Rachel contacted the district attorney, and in a stunning turn of events, found herself helping to bring down one of the city’s most notorious con artists.

With breathless pacing and in-depth reporting from the person who experienced it firsthand, My Friend Anna is an unforgettable true story of money, power, greed, and female friendship.