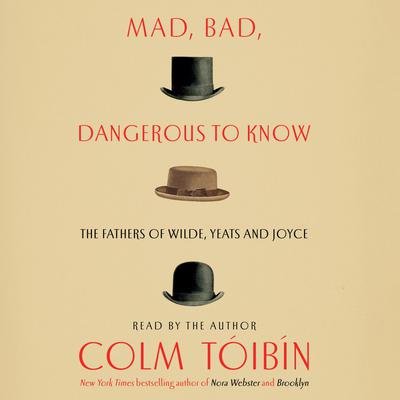 The Fathers of Wilde, Yeats and Joyce

From the multiple award-winning author of The Master and Brooklyn, an illuminating look at Irish culture, history, and literature through the lives of the fathers of three of Ireland’s greatest writers—Oscar Wilde's father, William Butler Yeats's father, and James Joyce's father—“Thrilling, wise, and resonant, this book aptly unites Tóibín’s novelistic gifts for psychology and emotional nuance with his talents as a reader and critic, in incomparably elegant prose” (The New York Times Book Review).

Colm Tóibín begins his incisive, revelatory Mad, Bad, Dangerous to Know with a walk through the Dublin streets where he went to university and where three Irish literary giants came of age. Oscar Wilde, writing about his relationship with his father stated: “Whenever there is hatred between two people there is bond or brotherhood of some kind…you loathed each other not because you were so different but because you were so alike.” W.B. Yeats wrote of his father, a painter: “It is this infirmity of will which has prevented him from finishing his pictures. The qualities I think necessary to success in art or life seemed to him egotism.” James’s father was perhaps the most quintessentially Irish, widely loved, garrulous, a singer, and drinker with a volatile temper, who drove his son from Ireland.

“An entertaining and revelatory book about the vexed relationships between these three pairs of difficult fathers and their difficult sons” (The Wall Street Journal), Mad, Bad, Dangerous to Know illustrates the surprising ways these fathers surface in the work of their sons. “As charming as [they are] illuminating, these stories of fathers and sons provide a singular look at an extraordi­nary confluence of genius” (Bookpage). Tóibín recounts the resistance to English cultural domination, the birth of modern Irish cultural identity, and the extraordinary contributions of these complex and masterful authors. “This immersive book holds literary scholarship to be a heartfelt, heavenly pursuit” (The Washington Post).