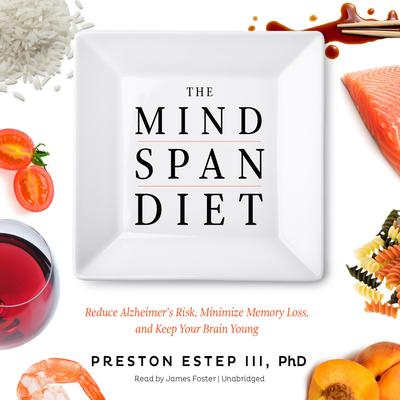 From an esteemed geneticist and the director of gerontology at the Personal Genome Project at Harvard Medical School comes a revolutionary plan for curbing memory loss and improving cognitive longevity that will forever change how you think about diet and aging.All around the world people are living longer than ever, but record numbers of us are experiencing cognitive decline and other brain disorders later in life. New studies show that Alzheimer's disease is the number three cause of death in developed countries, behind heart disease and cancer. But there is good news. We now have the knowledge to extend both lifespan and mindspan, helping to ensure that our minds and bodies stay in peak form at any age.Studying the diets of the "mindspan elite," those populations that live longest with low levels of dementia-as well as the ways that certain food additives and ingredients interact with our genes-Dr. Preston Estep explains how some recent books on the brain and aging have steered us down the wrong dietary path. Shattering myths about which foods are and are not beneficial to our brains, The Mindspan Diet reveals a simple plan to slow cognitive decline. Startling in its revelations about healthy eating for those over the age of forty, it challenges us to rethink our approach to many common staples, including the following:Iron: While iron-fortified foods sound healthy, high iron intake can be toxic, especially for people over forty, and increases the risk of adult-onset diabetes, Alzheimer's, and Parkinson's disease.Whole grains: Processed grains such as white rice, pasta, and flour are actually staples in the diets of cultures with the best cognitive health.Protein: Though it's considered by some to be a miracle macronutrient, high levels of protein are actually hard on the kidneys and may promote cancer and accelerate the progression of dementia.Complete with food recommendations, shopping lists, advice on reading nutrition labels, and more than seventy delicious recipes, The Mindspan Diet shows that you can enjoy the richest flavors life has to offer and remain lean, healthy, and cognitively intact for a very long life.

Notice to our customers about The Mindspan Diet