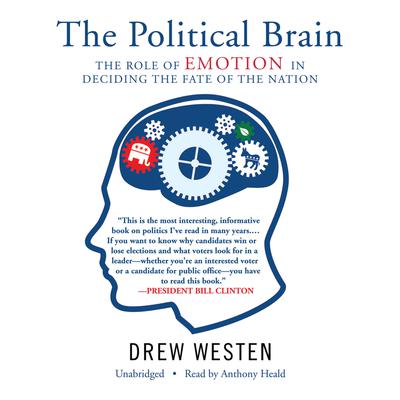 The Role of Emotion in Deciding the Fate of the Nation

The Political Brain is a groundbreaking investigation into how the mind works, how the brain works, and what this means for why candidates win and lose elections. Scientist and psychologist Drew Westen has explored a theory of the mind that differs substantially from the more dispassionate notions held by most cognitive psychologists, political scientists, and economists—and Democratic campaign strategists. The idea of the mind as a cool calculator that makes decisions by weighing the evidence bears no relation to how the brain actually works. When political candidates assume voters dispassionately make decisions based on the issues, they lose. That’s why only one Democrat has been reelected to the presidency since Franklin Roosevelt—and only one Republican has failed in that quest.

Westen turns conventional political analyses on their head, and his discoveries could utterly transform electoral arithmetic. You can’t change the structure of the brain, but you can change the way you appeal to it. This book will show you how.

Notice to our customers about The Political Brain