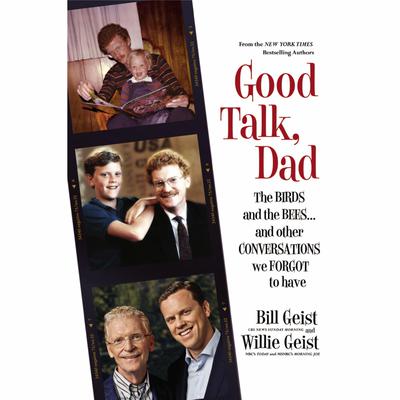 The Birds and the Bees...and Other Conversations We Forgot to Have

Told in a unique back-and-forth banter style, the hilarious father-son team will laugh together at the shared journey of their relationship. They'll riff on fatherhood, religion, music, sports, summer camp disasters, driving lessons gone horribly wrong, being on TV, and their wonderfully odd family life. Think Big Russ and Me meets S*** My Dad Says, with humorous observations about professional wrestling as a worldview, raising a kid with television cameras in the kitchen, and anything and everything else that comes to their witty minds.

The Geists decided to write this book so their children and grandchildren would have a record of their unusual father-son relationship. The book is remarkably funny, as well as poignant and sincere, especially in light of Bill's announcement that he's been diagnosed with Parkinson's. With its lighthearted look at the crazy things fathers and sons go through and the unique bond those experiences forge, the book is sure to be a must-have gift for Father's Day.