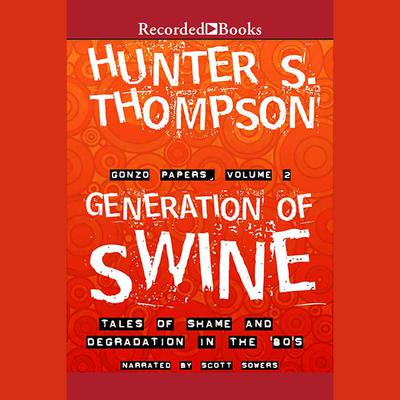 Generation of Swine, the second volume of the legendary Dr. Hunter S. Thompson's bestselling "Gonzo Papers," was first published in 1988 and is now back in print. Here, against a backdrop of late-night tattoo sessions and soldier-of-fortune trade shows, Dr. Thompson is at his apocalyptic best -- covering emblematic events such as the 1987-88 presidential campaign, with Vice President George Bush, Sr., fighting for his life against Republican competitors like Alexander Haig, Pat Buchanan, and Pat Robertson; detailing the GOP's obsession with drugs and drug abuse; while at the same time capturing momentous social phenomena as they occurred, like the rise of cable, satellite TV, and CNN -- 24 hours of mainline news. Showcasing his inimitable talent for social and political analysis, Generation of Swine is vintage Thompson -- eerily prescient, incisive, and enduring.