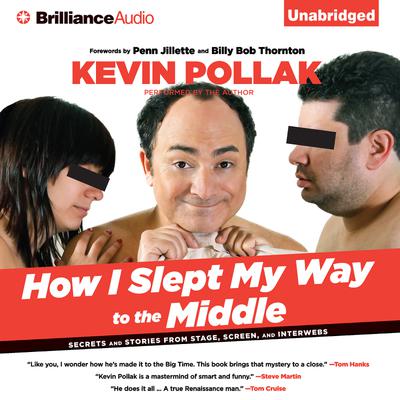 How I Slept My Way to the Middle

Secrets and Stories from Stage, Screen, and Interwebs

Kevin Pollak rose through the comedy club ranks at the feet of Don Rickles and Bill Cosby, Johnny Carson and George Carlin. Named one of Comedy Central’s Top 100 Stand-Up Comedians of All Time, he’s a killer impressionist—Falk, Shatner, Walken, Nicholson—a versatile actor with one of the most respected filmographies around, and an Internet pioneer. He’s done it all, and now he’s ready to spill the beans.

Ballsy, hilarious, and revealing, How I Slept My Way to the Middle winningly combines never-before-heard stories featuring A-list entertainers with fan favorites and Kevin’s own thoughts about how he made it. He turned down his first invitation to do stand-up on The Tonight Show because he knew that he’d make a bigger splash if he sat on the couch next to Johnny. That huge risk—which paid off in spades—was just the beginning. Find out how he brought John Belushi to his knees, tortured Paul Reiser (twice), bamboozled Larry King, stole Alan Arkin’s soul, almost killed Warren Beatty, and sucked face with Robert De Niro’s girlfriend. Now a new media entrepreneur, Kevin is laughing proof that if you follow your gut and believe in yourself, you can do anything you want—except have a rational conversation with Rip Torn, who’s an evil, paranoid $#!%.