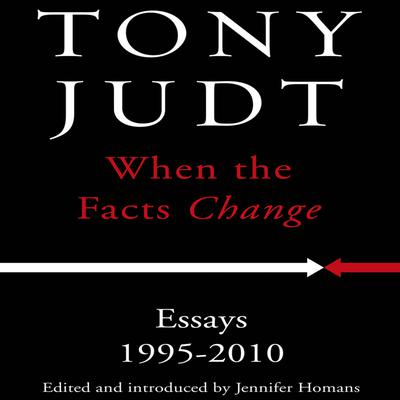 When the Facts Change

In an age in which the lack of independent public intellectuals has often been sorely lamented, the historian Tony Judt played a rare and valuable role, bringing together history and current events, Europe and America, what was and what is with what should be. In When the Facts Change, Tony Judt’s widow and fellow historian Jennifer Homans has assembled an essential collection of the most important and influential pieces written in the last fifteen years of Judt’s life, the years in which he found his voice in the public sphere. Included are seminal essays on the full range of Judt’s concerns, including Europe as an idea and in reality, before 1989 and thereafter; Israel, the Holocaust and the Jews; American hyperpower and the world after 9/11; and issues of social inclusion and social justice in an age of increasing inequality. Judt was at once most at home and in a state of what he called internal exile from his native England, from Europe, and from America, and he finally settled in New York—between them all. He was a historian of the twentieth century acutely aware of the dangers of ethnic exceptionalism, and if he was shaped by anything, it was the Jewish past and his own secularism. His essays on Israel ignited a firestorm debate for their forthright criticisms of Israeli government polices relating to the Palestinians and the occupied territories. Those crucial pieces are published here in book form for the first time, including an essay, never previously published, called “What Is to Be Done?” These pieces are suffused with a deep compassion for the Israeli dilemma, a compassion that instilled in Judt a sense of responsibility to speak out and try to find a better path, away from what he saw as a road to ruin.