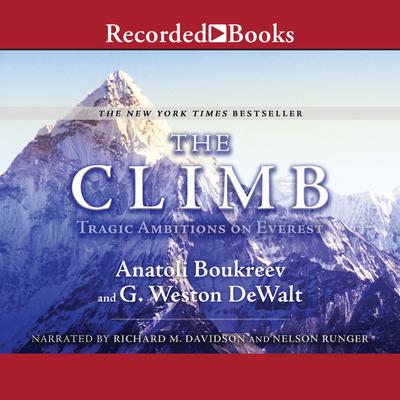 Anatoli Boukreev's first-hand account of the worst human disaster in the history of Mt. Everest will hold listeners spellbound. A top-rated guide and high altitude climber, Boukreev dictated the raw and powerful details of this ill-fated trek from memories and notes recorded just five days after the catastrophe. In May of 1996, 33 people went up the mountain, but only 28 returned. As two commercial expeditions climbed the world's highest peak, poor planning, miscommunication, and an unpredictable blizzard conspired to defeat them. Although the author made it back to the safety of his tent, he defied his own pain and exhaustion to go back up the mountain. His rescue attempt saved the lives of three climbers. The events of those two fateful days prompted researchers at MIT to develop new technology that could prevent the recurrence of such a disaster. Narrators Richard M. Davidson and Nelson Runger sensitively convey the full scope of a drama and a tragedy the world hopes never to see again.