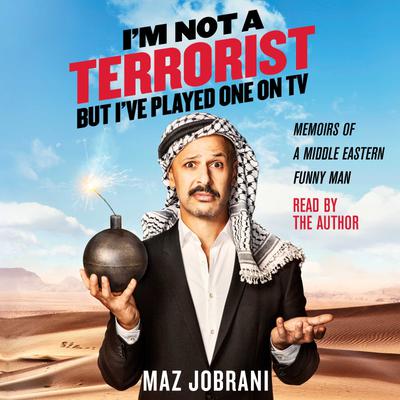 I'm Not a Terrorist, But I've Played One On TV

“A funny, insightful memoir” (Kirkus Reviews) about growing up Iranian in America, and the quest to make it as an actor in Hollywood without having to wear a turban, tote a bomb, or get kicked in the face by Chuck Norris.

After he emigrated with his family to the US during the Iranian Revolution, Maz Jobrani spent most of his youth trying to fit in with his adopted culture—learning to play baseball and religiously watching Dallas. But none of his attempts at assimilation made a difference to casting directors, who only auditioned him for the role of kebab-eating, bomb-toting, extremist psychopath.

When he first started out in show business, Maz endured suggestions that he spice up his stand-up act by wearing “the outfit,” fielded questions about rising gas prices, and was jeered for his supposed involvement in the Iran hostage crisis. In fact, these things happened so often that he began to wonder: Could I be a terrorist without even knowing it? And when all he seemed to be offered were roles that required looking menacingly Arabic, he wondered if he would ever make it in America.

This laugh-out-loud memoir chronicles a lifetime of both killing it and bombing on stage, with “plenty to say about matters of race, assimilation, embarrassing family members, life in America for brown-skinned people before and after 9/11, the vagaries of international pop culture, and making it in big, dumb, fizzy, sometimes beautiful America” (The New York Times).