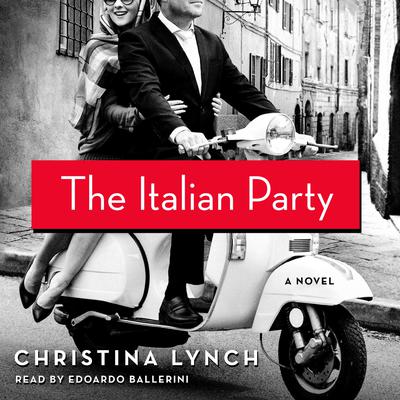 “Chris Pavone's The Expats meets Amor Towles' A Gentleman in Moscow in this delightful novel. Scottie and Michael Messina are newlyweds when they arrive in Italy in April of 1956, where Michael is supposed to head up a new division of Ford. There is so much unknown between any typical pair of newlyweds, but Michael and Scottie harbor deeper secrets from each other, among them Michael's true occupation as a spy for the American government. Lynch evokes the period of the 1950s - Betty Crocker, Wonder Bread, and an entrenched distrust of Communism - in a story that froths with gossip and is sweetened by intrigue, stirred with the complex history of Italian and American relations. Delicious and positively drinkable.”

The Italian Party by Christina Lynch is a delicious and sharply funny audiobook about “innocent” Americans abroad in 1950s Siena.

Newly married, Scottie and Michael are seduced by Tuscany's famous beauty. But the secrets they are keeping from each other force them beneath the splendid surface to a more complex view of ltaly, America and each other.

When Scottie’s Italian teacher—a teenager with secrets of his own—disappears, her search for him leads her to discover other, darker truths about herself, her husband and her country. Michael’s dedication to saving the world from communism crumbles as he begins to see that he is a pawn in a much different game. Driven apart by lies, Michael and Scottie must find their way through a maze of history, memory, hate and love to a new kind of complicated truth.

Half glamorous fun, half an examination of America's role in the world, and filled with sun-dappled pasta lunches, prosecco, charming spies and horse racing, The Italian Party is a smart pleasure to listen to.

Praise for The Italian Party:

"Tremendous fun! Wives with big secrets, husbands with bigger ones, swirling around a 1950s Siena teeming with seduction and spycraft." —Chris Pavone, New York Times bestselling author of The Travelers and The Expats

"The story plays like a confectionary Hollywood romance with some deeper notes reminiscent of John le Carré and Henry James. Scottie is a resilient main character who might have been played by Grace Kelly or Audrey Hepburn in a 1950s movie adaptation of this entertainingly subversive take on that seemingly innocent period." - Publishers Weekly

“Set in Siena in 1956, this debut novel is a spy thriller, comedy of manners, and valentine to Italy, spiked with forbidden sex and political skulduggery [...] The ending is unexpected, with the author displaying a sophisticated, nuanced view of love and marriage that feels very modern. Or maybe it's just Italian.” — Kirkus Reviews