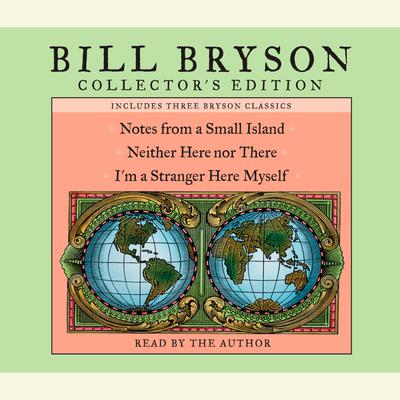 Notes from a Small Island, Neither Here Nor There, and I'm a Stranger Here Myself

Notes from a Small Island
After nearly two decades in Britain, Bill Bryson decided to move his wife and kids back to his homeland of the United States. But not before taking one last trip around Britain, a sort of valedictory tour of the green and kindly island that had so long been his home. The result is a hilarious social commentary that conveys the true glory of Britain.

Neither Here nor There
Thirty years after backpacking across Europe, Bill Bryson decides to retrace the journey he undertook in the halcyon days of his youth–carrying with him a bag of maps, old clothes…and a stinging wit honed to razor sharpness by two decades of adult experience.

I’m a Stranger Here Myself
Bill Bryson read “somewhere” that nearly three million Americans believed they had been abducted by aliens–clearly the Americans needed Bill back. So after years raising his family in Britain with his English wife, the brood moves to the United States, and leaves Bill to chronicle the quirkiest aspects of life in America as he reveals his own rules for life.