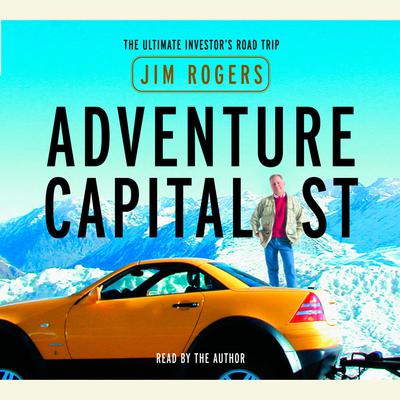 The bestselling author of Investment Biker is back from the ultimate road trip: a three-year drive around the world that would ultimately set the Guinness record for the longest continuous car journey. In Adventure Capitalist, legendary investor Jim Rogers, dubbed “the Indiana Jones of finance” by Time magazine, proves that the best way to profit from the global situation is to see the world mile by mile. “While I have never patronized a prostitute,” he writes, “I know that one can learn more about a country from speaking to the madam of a brothel or a black marketeer than from meeting a foreign minister.”

Behind the wheel of a sunburst-yellow, custom-built convertible Mercedes, Rogers and his fiancée, Paige Parker, began their “Millennium Adventure” on January 1, 1999, from Iceland. They traveled through 116 countries, including many where most have rarely ventured, such as Saudi Arabia, Myanmar, Angola, Sudan, Congo, Colombia, and East Timor. They drove through war zones, deserts, jungles, epidemics, and blizzards. They had many narrow escapes.

They camped with nomads and camels in the western Sahara. They ate silkworms, iguanas, snakes, termites, guinea pigs, porcupines, crocodiles, and grasshoppers.

Best of all, they saw the real world from the ground up—the only vantage point from which it can be truly understood—economically, politically, and socially.

Here are just a few of the author’s conclusions:

• The new commodity bull market has started.
• The twenty-first century will belong to China.
• There is a dramatic shortage of women developing in Asia.
• Pakistan is on the verge of disintegrating.
• India, like many other large nations, will break into several countries.
• The Euro is doomed to fail.
• There are fortunes to be made in Angola.
• Nongovernmental organizations (NGOs) are a scam.
• Bolivia is a comer after decades of instability, thanks to gigantic amounts of natural gas.

Adventure Capitalist is the most opinionated, sprawling, adventurous journey you’re likely to take within the pages of a book—the perfect read for armchair adventurers, global investors, car enthusiasts, and anyone interested in seeing the world and understanding it as it really is.