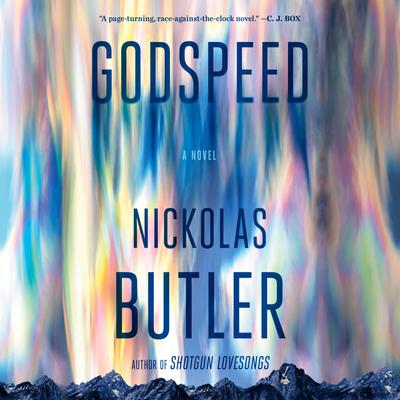 “Nickolas Butler's authorial voice is stalwart as ever, turning toward the natural world and working people with perceptive and unsentimental regard. Even as this story marks a divergence from his beloved Wisconsin landscape for the tourist destination near Jackson Hole, he does not diverge from what he does best: capturing the halting dynamics of male friendships and fractured emotions. The simple plot—a fledgling construction company is hired to build an elaborate house in the middle of nowhere for an eccentric millionaire—turns into an eery page-turner as the amateur builders race against time, brutal elements, and their own demons to complete the project. The story will leave you thinking about our country's widening wealth gap and obsession with capitalism and how work invites both meaning and menace into our lives. I am still grappling with the outcomes Butler gives his characters, but highly recommend reading Godspeed to decide for yourself—you'll fly through it.”

In this riveting new novel by the bestselling and award-winning author of Shotgun Lovesongs, three troubled construction workers get entangled in a dangerous plan against an impossible deadline.

Why is it being built here, and why so quickly? These are the questions Cole, Bart, and Teddy, the three principals of True Triangle Construction, ask themselves when they are hired to finish a project for a mysteriously wealthy homeowner. Nestled in the mountains outside of Jackson, Wyoming, the house is a masterpiece, unlike anything they've done before. Once finished, it promises to be the architectural prize of Jackson and could put True Triangle on the map. But despite the project's lure, the owner is intent on having it built in a matter of months, an impossible task made irresistible by the exorbitant bonus that awaits them if they succeed. A bonus that could change the course of their business, and their lives.

Up against the fateful deadline, and the looming threat of a harsh Wyoming winter, Cole, Bart, and Teddy are willing to do anything to get the money, even if it means risking life, limb, and family. And what becomes an obsession for all three quickly builds to tragic consequences for some. Struck through with heart-pounding danger and an arresting lyricism, Godspeed is a stark exploration of the haves and the have-nots, a cautionary tale of greed and violence that asks: How much is never enough?