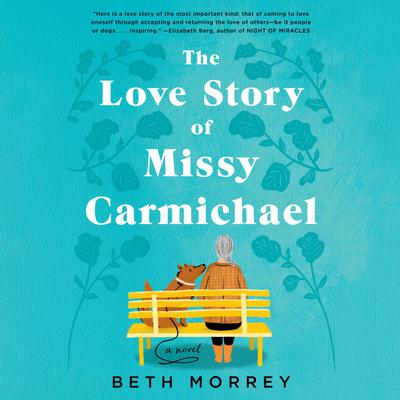 The Love Story of Missy Carmichael

The Love Story of Missy Carmichael

“Missy Carmichael is so very alone now that her husband is gone, her daughter is estranged, and her beloved son and grandson live in Australia. A park visit gone awry opens up her world to new people. She finds solace and family with Bob, a dog foisted on her, and friends who make up a new family. There's laughter, love, and grief. It's a tearjerker of the best kind.”

For readers of Eleanor Oliphant Is Completely Fine and A Man Called Ove, a life-affirming, deeply moving "coming-of-old" story, a celebration of how ordinary days are made extraordinary through friendship, family, and the power of forgiving yourself--at any age.

"At a time when people are having to isolate, [this novel is] a balm, offering an expansive sense of love and possibility at a time when the main characters feel like those chances are gone." --Christian Science Monitor

The world has changed around seventy-nine-year-old librarian Millicent Carmichael, aka Missy. Though quick to admit that she often found her roles as a housewife and mother less than satisfying, Missy once led a bustling life driven by two children, an accomplished and celebrated husband, and a Classics degree from Cambridge. Now her husband is gone, her daughter is estranged after a shattering argument, and her son has moved to his wife's native Australia, taking Missy's beloved only grandchild half-a-world away. She spends her days sipping sherry, avoiding people, and rattling around in her oversized, under-decorated house waiting for...what exactly?

The last thing Missy expects is for two perfect strangers and one spirited dog named Bob to break through her prickly exterior and show Missy just how much love she still has to give. In short order, Missy finds herself in the jarring embrace of an eclectic community that simply won't take no for an answer--including a rambunctious mutt-on-loan whose unconditional love gives Missy a reason to re-enter the world one muddy paw print at a time.

For Fans of Eleanor Oliphant Is Completely Fine