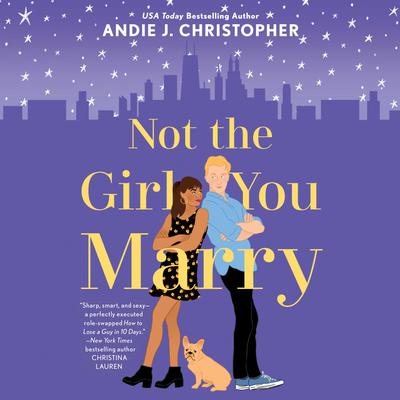 Not the Girl You Marry

Not the Girl You Marry

“This is a fun and engaging read. Don’t let the concept (a role reversal of How to Lose a Guy in 10 Days) or cute cover fool you. There is a lot more depth to this plot than meets the eye; it’s about being seen and accepting your true self. Jack and Hannah both try to be what they think others want them to be but, because of their deceptions due to job obligations, are actually their natural selves. I can’t wait for book two.”

How To Lose a Guy in 10 Days gets a millennial makeover in this romantic comedy by USA Today bestselling author Andie J. Christopher.

“The way Jack sets out to win Hannah back is really the stuff of true romance.”—NPR

Jack Nolan is a gentleman, a journalist, and unlucky in love. His viral success has pigeon-holed him as the how-to guy for a buzzy, internet media company instead of covering hard-hitting politics. Fed up with his fluffy articles and the app-based dating scene as well, he strikes a deal with his boss to write a final piece de resistance: How to Lose a Girl. Easier said than done when the girl he meets is Hannah Mayfield, and he's not sure he wants her to dump him.

Hannah is an extremely successful event planner who's focused on climbing the career ladder. Her firm is one of the most prestigious in the city, and she's determined to secure her next promotion. But Hannah has a bit of an image problem. She needs to show her boss that she has range, including planning dreaded, romantic weddings. Enter Jack. He’s the perfect man to date for a couple weeks to prove to her boss that she’s not scared of feelings.

Before Jack and Hannah know it, their fake relationship starts to feel all too real—and neither of them can stand to lose each other.