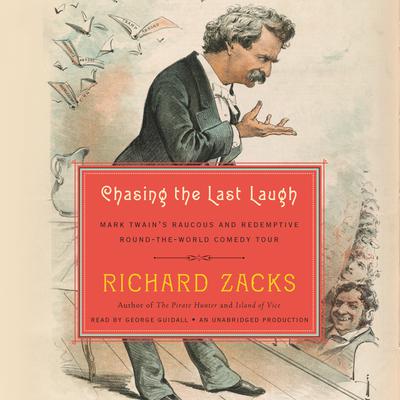 From Richard Zacks, bestselling author of Island of Vice and The Pirate Hunter, a rich and lively account of how Mark Twain’s late-life adventures abroad helped him recover from financial disaster and family tragedy—and revived his world-class sense of humor

Mark Twain, the highest-paid writer in America in 1894, was also one of the nation’s worst investors. “There are two times in a man’s life when he should not speculate,” he wrote. “When he can’t afford it and when he can.” The publishing company Twain owned was failing; his investment in a typesetting device was bleeding red ink. After losing hundreds of thousands of dollars back when a beer cost a nickel, he found himself neck-deep in debt. His heiress wife, Livy, took the setback hard. “I have a perfect horror and heart-sickness over it,” she wrote. “I cannot get away from the feeling that business failure means disgrace.”
But Twain vowed to Livy he would pay back every penny. And so, just when the fifty-nine-year-old, bushy-browed icon imagined that he would be settling into literary lionhood, telling jokes at gilded dinners, he forced himself to mount the “platform” again, embarking on a round-the-world stand-up comedy tour. No author had ever done that. He cherry-picked his best stories—such as stealing his first watermelon and buying a bucking bronco—and spun them into a ninety-minute performance.
Twain trekked across the American West and onward by ship to the faraway lands of Australia, New Zealand, Tasmania, India, Ceylon, and South Africa. He rode an elephant twice and visited the Taj Mahal. He saw Zulus dancing and helped sort diamonds at the Kimberley mines. (He failed to slip away with a sparkly souvenir.) He played shuffleboard on cruise ships and battled captains for the right to smoke in peace. He complained that his wife and daughter made him shave and change his shirt every day.
The great American writer fought off numerous illnesses and travel nuisances to circle the globe and earn a huge payday and a tidal wave of applause. Word of his success, however, traveled slowly enough that one American newspaper reported that he had died penniless in London. That’s when he famously quipped: “The report of my death was an exaggeration.”
Throughout his quest, Twain was aided by cutthroat Standard Oil tycoon H.H. Rogers, with whom he had struck a deep friendship, and he was hindered by his own lawyer (and future secretary of state) Bainbridge Colby, whom he deemed “head idiot of this century.”
In Chasing the Last Laugh, author Richard Zacks, drawing extensively on unpublished material in notebooks and letters from Berkeley’s ongoing Mark Twain Project, chronicles a poignant chapter in the author’s life—one that began in foolishness and bad choices but culminated in humor, hard-won wisdom, and ultimate triumph.