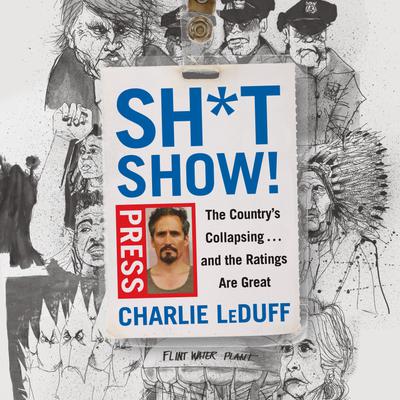 The Country's Collapsing . . . and the Ratings Are Great

““Sh*tShow! The Country is Collapsing…and the Ratings Are Great” by Charlie LeDuff is a dark and desperate descent into the death of the American Dream as we know it. Gonzo-journalism at its grittiest, LeDuff’s cross examination of a country in crisis is compelling, compassionate and completely horrifying. From Fox News to the Flint Water Crisis to Ferguson, LeDuff documents the daily struggles of the defeated, depressed and downright despicable amidst an American government immersed in populism, plutocracy and authoritarianism. Whether you agree on fake news or not, this book is f*#king frightening!”

A daring, firsthand, and utterly-unscripted account of crisis in America, from Ferguson to Flint to Cliven Bundy's ranch to Donald Trump's unstoppable campaign for President--at every turn, Pulitzer-prize winner and bestselling author of Detroit: An American Autopsy, Charlie LeDuff was there

In the Fall of 2013, long before any sane person had seriously considered the possibility of a Trump presidency, Charlie LeDuff sat in the office of then-Fox News CEO Roger Ailes, and made a simple but prophetic claim: The whole country is bankrupt and on high boil. It’s a shitshow out there. No one in the bubbles of Washington, DC., New York, or Los Angles was talking about it--least of all the media. LeDuff wanted to go to the heart of the country to report what was really going on. Ailes baulked. Could the hard-living and straight-shooting LeDuff be controlled? But, then, perhaps on a whim, he agreed. And so LeDuff set out to record a TV series called, "The Americans," and, along the way, ended up bearing witness to the ever-quickening unraveling of The American Dream.

For three years, LeDuff travelled the width and breadth of the country with his team of production irregulars, ending up on the Mexican border crossing the Rio Grande on a yellow rubber kayak alongside undocumented immigrants; in the middle of Ferguson as the city burned; and watching the children of Flint get sick from undrinkable water. Racial, political, social, and economic tensions were escalating by the day. The inexorable effects of technological change and globalization were being felt more and more acutely, at the same time as wages stagnated and the price of housing, education, and healthcare went through the roof. The American people felt defeated and abandoned by their politicians, and those politicians seemed incapable of rising to the occasion. The old way of life was slipping away, replaced only by social media, part-time work, and opioid addiction.

Sh*tshow! is that true, tragic, and distinctively American story, told from the parts of the country hurting the most. A soul-baring, irreverent, and iconoclastic writer, LeDuff speaks the language of everyday Americans, and is unafraid of getting his hands dirty. He scrambles the tired-old political, social, and racial categories, taking no sides--or prisoners. Old-school, gonzo-style reporting, this is both a necessary confrontation with the darkest parts of the American psyche and a desperately-needed reminder of the country's best instincts.