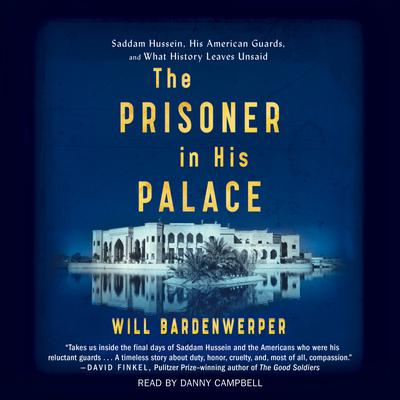 The Prisoner in His Palace

Saddam Hussein and the Twelve Americans Who Guarded Him

The Prisoner in His Palace

“Viewed by most of mankind as a depraved, despotic dictator, Saddam Hussein, a master manipulator, manages to confound the twelve American soldiers sent in secrecy to guard him during his captivity and his final days on earth. Will Bardenwerper tackles the difficult topic of a terror-inducing Hussein in The Prisoner in His Palace, a narrative likely to wreak havoc on your senses by questioning the man himself, the myth and his eventual demise. An incredibly intense read, I was horrified to find myself in tears over Hussein’s last moments with his Super Twelve, something I would never have expected for this monster.”

In the tradition of In Cold Blood and The Executioner’s Song, this haunting, insightful, and surprisingly intimate portrait of Saddam Hussein provides “a brief, but powerful, meditation on the meaning of evil and power” (USA TODAY).

The “captivating” (Military Times) The Prisoner in His Palace invites us to take a journey with twelve young American soldiers in the summer of 2006. Shortly after being deployed to Iraq, they learn their assignment: guarding Saddam Hussein in the months before his execution.

Living alongside, and caring for, their “high value detainee and regularly transporting him to his raucous trial, many of the men begin questioning some of their most basic assumptions—about the judicial process, Saddam’s character, and the morality of modern war. Although the young soldiers’ increasingly intimate conversations with the once-feared dictator never lead them to doubt his responsibility for unspeakable crimes, the men do discover surprising new layers to his psyche that run counter to the media’s portrayal of him.

Woven from firsthand accounts provided by many of the American guards, government officials, interrogators, scholars, spies, lawyers, family members, and victims, The Prisoner in His Palace shows two Saddams coexisting in one person: the defiant tyrant who uses torture and murder as tools, and a shrewd but contemplative prisoner who exhibits surprising affection, dignity, and courage in the face of looming death.

In this thought-provoking narrative, Saddam, known as the “man without a conscience,” gets many of those around him to examine theirs. “A singular study exhibiting both military duty and human compassion” (Kirkus Reviews), The Prisoner in His Palace grants us “a behind-the-scenes look at history that’s nearly impossible to put down…a mesmerizing glimpse into the final moments of a brutal tyrant’s life” (BookPage).