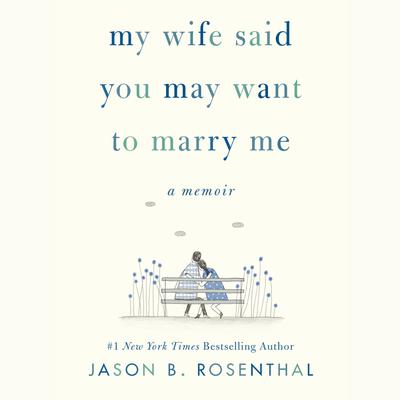 My Wife Said You May Want to Marry Me

My Wife Said You May Want to Marry Me

“Shortly before her untimely death from ovarian cancer, Amy Krouse Rosenthal wrote a column that appeared in the New York Times Modern Love section. Entitled "You Might Want to Marry My Husband," it detailed her loving marriage with Jason and her wish that he find happiness after she passed. The column went viral and was read more than 5 million times. In this memoir, Jason recalls his marriage to the incomparable Amy, the agony of her death and his journey through grief. Full of candor and encouragement, this offers support to those experiencing their own loss.”

An inspiring memoir of life, love, loss, and new beginnings by the widower of bestselling author and filmmaker Amy Krouse Rosenthal, whose last act of love before her death was setting the stage for her husband’s life without her in a Modern Love column in the New York Times.

On March 3, 2017, Amy Krouse Rosenthal penned a Modern Love column for the New York Times —"You May Want to Marry My Husband." It appeared ten days before her death from ovarian cancer. A heartbreaking, wry, brutally honest, and creative play on a personal ad—in which a dying wife encouraged her husband to go on and find happiness after her demise—the column quickly went viral, reaching more than five million people worldwide.

In My Wife Said You May Want to Marry Me, Jason describes what came next, even as he struggled with her loss. Surveying his life before, with, and after Amy, Jason ruminates on love, the pain of watching a loved one suffer, and what it means to heal—how he and their three children, despite their profound sorrow, went on. Jason’s emotional journey offers insights on dying and death and the excruciating pain of losing a soulmate, and illuminates the lessons he learned.

As he reflects on Amy’s gift to him—a fresh start to fill his empty space with a new story—Jason describes how he continues to honor Amy’s life and her last wish, and how he seeks to appreciate every day and live in the moment while trying to help others coping with loss. My Wife Said You May Want to Marry Me is the poignant, unreserved, and inspiring story of a great love, the aftermath of a marriage ended too soon, and how a surviving partner eventually found a new perspective on life’s joys in the wake of tremendous loss.