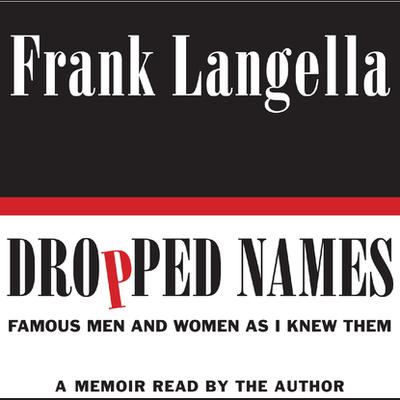 Famous Men and Women As I Knew Them

Captured forever in a unique memoir, Frank Langella's myriad encounters with some of the past century's most famous human beings are profoundly affecting, funny, wicked, sometimes shocking, and utterly irresistible. With sharp wit and a perceptive eye, Mr. Langella takes us with him into the private worlds and privileged lives of movie stars, presidents, royalty, literary lions, the social elite, and the greats of the Broadway stage.

What, for instance, was Jack Kennedy doing on that coffee table? Why did the Queen Mother need Mr. Langella's help? When was Paul Mellon going to pay him money owed? How did Brooke Astor lose her virginity? Why was Robert Mitchum singing Gilbert & Sullivan patter songs at top volume, and what did Marilyn Monroe say to him that helped change the course of his life?

Through these shared experiences, we learn something, too, of Mr. Langella's personal journey from the age of fifteen to the present day.

Dropped Names is, like its subjects, riveting and unforgettable.