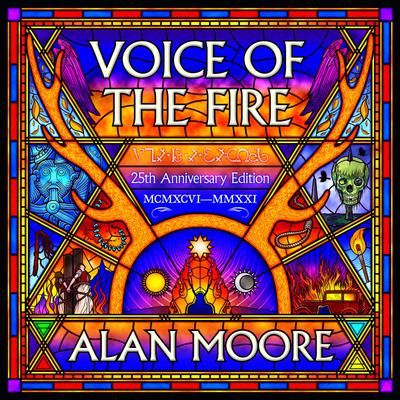 Voice of the Fire

An epic audiobook in 12 parts

As Alan Moore’s place-writing masterpiece reaches its 25th anniversary, New Perspectives brings this expansive work to life through twelve immersive audio journeys. Violence, madness, lust and ecstasy all weave together in patterns of recurring visions, restless apparitions, and gut-wrenching narrative that offer an unprecedented voice to one of the country’s most enigmatic regions.

A prehistoric-boy learns a deadly lesson, a murderess dresses up as her victim, a Roman emissary confronts an unbearable truth about the empire, two lovers burn at the stake for witchcraft and a poet begins his doomed walk from one incarceration to another.

Blending history with wild imagination this collection of remarkable tales submerge you in the power of language and unveil the deepest secrets hidden in the land. Spoken by an exceptional cast, from Maxine Peake to Sleaford Mods vocalist Jason Williamson, this is epic cinema for the ears, firmly rooted in the author’s home town of Northampton.