“Highly imaginative and incredibly ambitious, Cloud Cuckoo Land is a story within a story that is about stories. Though the premise, like the title, sounds maddening, I found Anthony Doerr’s novel to be rich, intricate, and deeply profound. Like the thread that binds together a vibrant tapestry, the story within the story, also named Cloud Cuckoo Land, weaves the tales of Anna, Omeir, Zeno, Seymour, and Konstance as it defies time and space to ensure their stories endure. A love letter to the tales that have survived the cruel test of time and to the stories that take us away to magical realms above our own, those who’ve read Cloud Atlas and The Ten Thousand Doors of January will take pleasure and delight in Cloud Cuckoo Land. Marin Ireland and Simon Jones' narrations were the cherry on the cake, making the story all the better for their lively and delightful voices.”

“Anthony Doerr's novel Cloud Cuckoo Land is a triumph. This cautionary yet hopeful tale of five very different people obsessed with one ancient book will transport you to Constantinople 600 years ago, present-day Idaho, and to a spaceship a generation or two in the future. It's not too late to be good stewards of Mother Earth. Cloud Cuckoo Land reminds us that the children might just save us all.”

“From the author of the much loved All The Light We Cannot See comes a very different and imaginative story. Doerr writes of the longevity of books and libraries and how they endure through time. Spanning from 15th century Constantinople, to present day Idaho (where he lives), to a 22nd century spaceship, one wonders how these settings and characters could possibly intersect. But, they do in surprising ways. This is my favorite book of the year. Enjoy!”

“I loved this book so much. The intersection of the various stories surrounding a profound awareness of the importance of books was perfect. I also appreciated the weaving of the classic tale intertwined all throughout the book. Each character's story could have been a book all by themselves, but having them all together was brilliant. This is a book that I didn't know I needed, but was the perfect book for the time I listened to it.”

“Spanning from the final days of Constantinople to the distant space-exploring future, this is about how stories resonant across space and time. I know that readers will emerge from its pages grateful: for our connections with each other, how great art outlasts all of us, how together we are all writing one big story, imperfect and hopeful.”

“A beautiful tribute to the human need to preserve and share stories. One to read and read again! One of my Top 3 for 2021!”

On the New York Times bestseller list for over 20 weeks * A New York Times Notable Book * A Barack Obama Favorite * A National Book Award Finalist * Named a Best Book of the Year by Fresh Air, Time, Entertainment Weekly, Associated Press, and many more

“If you’re looking for a superb novel, look no further.” —The Washington Post

From the Pulitzer Prize–winning author of All the Light We Cannot See, comes the instant New York Times bestseller that is a “wildly inventive, a humane and uplifting book for adults that’s infused with the magic of childhood reading experiences” (The New York Times Book Review).

Among the most celebrated and beloved novels of recent times, Cloud Cuckoo Land is a triumph of imagination and compassion, a soaring story about children on the cusp of adulthood in worlds in peril, who find resilience, hope, and a book.

In the 15th century, an orphan named Anna lives inside the formidable walls of Constantinople. She learns to read, and in this ancient city, famous for its libraries, she finds what might be the last copy of a centuries-old book, the story of Aethon, who longs to be turned into a bird so that he can fly to a utopian paradise in the sky. Outside the walls is Omeir, a village boy, conscripted with his beloved oxen into the army that will lay siege to the city. His path and Anna’s will cross.

In the present day, in a library in Idaho, octogenarian Zeno rehearses children in a play adaptation of Aethon’s story, preserved against all odds through centuries. Tucked among the library shelves is a bomb, planted by a troubled, idealistic teenager, Seymour. This is another siege.

And in a not-so-distant future, on the interstellar ship Argos, Konstance is alone in a vault, copying on scraps of sacking the story of Aethon, told to her by her father.

Anna, Omeir, Seymour, Zeno, and Konstance are dreamers and outsiders whose lives are gloriously intertwined. Doerr’s dazzling imagination transports us to worlds so dramatic and immersive that we forget, for a time, our own. 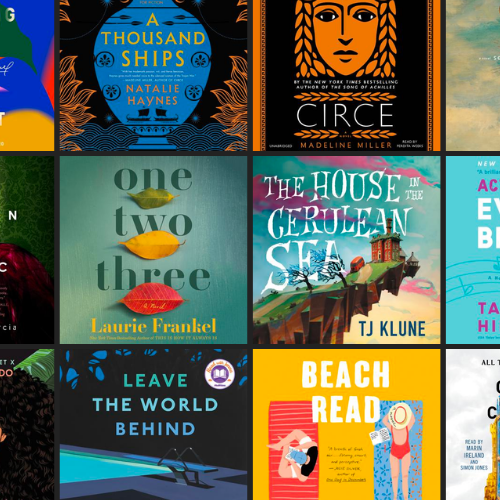 Top 20 Most Recommended Fiction Audiobooks of All Time

Interview with The Guardian

"Marin Ireland and Simon Jones sparkle as they narrate this immersive time-traveling novel. They vividly deliver the stories that weave through this audiobook. A gifted mimic, Ireland performs subtle and effective emulations of Australian, Italian, and English accents. When she slows down to enunciate the classical Greek sprinkled throughout the text, her reading shimmers with meaning. Both Ireland and Jones are masters of pacing and cadence, which matters in an interwoven narrative that shifts in time from the fall of Constantinople (1450s) to present-day small-town Idaho and to a future set on a spacecraft. From accounts of myths to misbegotten environmental terrorism, Doerr's novel pulls out all the stops, and the narrators create an enduring listening experience." Expand reviews