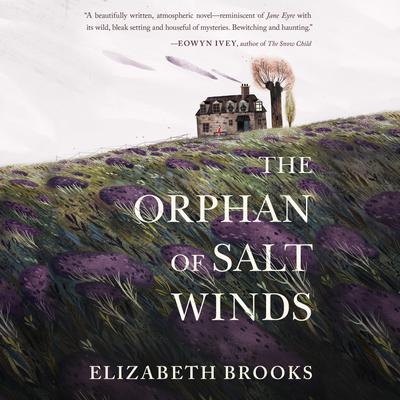 The Orphan of Salt Winds

The Orphan of Salt Winds

“As 2015 winds down, so does the life of Virginia, who at the age of 86 has decided to let a sign from her mysterious past give her reason to walk out into the treacherous marsh of the Salt Winds that claimed her foster father when she was a child. As Virginia ponders her fate, a young woman appears on her doorstep and complicates her plan, bringing a tidal wave of memories that cause her to see her last day in an altogether darker light. Told in alternating timelines that follow Virginia as a child in the early stages of WWII and as she plots out her last day alive in 2015, Elizabeth Brooks’ novel of memories past and present plays out as a locked-room mystery Agatha Christie would be envious of.”

For fans of Eowyn Ivey, Rose Tremaine, and Kate Atkinson, The Orphan of Salt Winds is a bewitching debut about the secrets that haunt us.

England, 1939. Ten-year-old Virginia Wrathmell arrives at Salt Winds, a secluded house on the edge of a marsh, to meet her adoptive parents―practical, dependable Clem and glamorous, mercurial Lorna. The marsh, with its deceptive tides, is a beautiful but threatening place. Virginia’s new parents’ marriage is full of secrets and tensions she doesn’t quite understand, and their wealthy neighbor, Max Deering, drops by too often, taking an unwholesome interest in the family’s affairs. Only Clem offers a true sense of home. War feels far away among the birds and shifting sands―until the day a German fighter plane crashes into the marsh, and Clem ventures out to rescue the airman. What happens next sets into motion a crime so devastating it will haunt Virginia for the rest of her life. Seventy-five years later, she finds herself drawn back to the marsh, and to a teenage girl who appears there, nearly frozen and burdened by her own secrets. In her, Virginia might have a chance at retribution and a way to right a grave mistake she made as a child.

Elizabeth Brooks’s gripping debut mirrors its marshy landscape―full of twists and turns and moored in a tangle of family secrets. A gothic, psychological mystery and atmospheric coming-of-age story, The Orphan of Salt Winds is the portrait of a woman haunted by the place she calls home.