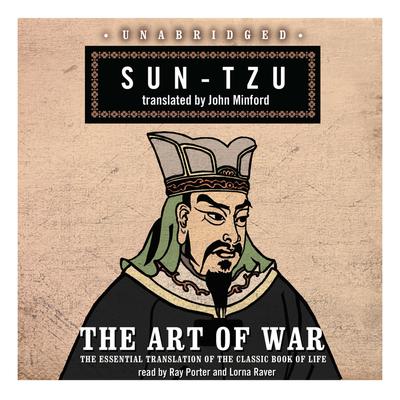 The Art of War

The Essential Translation of the Classic Book of Life

Master Sun said: “Ultimate excellence lies not in winning every battle but in defeating the enemy without ever fighting.”

For more than two thousand years, The Art of War has stood as a cornerstone of Chinese culture, a lucid text that reveals as much about psychology, politics, and economics as it does about battlefield strategy. For those seeking a deeper understanding of this seminal work, scholar John Minford brings the words of Sun-tzu to life for modern listeners, presenting the core text in two formats:

Part I: The original text by Sun-tzuRay Porter reads the unadorned thirteen chapters, allowing listeners to form their own first impressions of the ancient words of wisdom ascribed to Sun-tzu.

Part II: The original text with running commentaryRead by Ray Porter and Lorna Raver, the original text is presented again, this time with extensive running commentary by traditional Chinese scholars and the translator, providing context and subtext for the work. Included is a lively, learned introduction, read by Lorna Raver, in which Minford explores the life and times of Sun-tzu and considers how best to read and understand the work today.

Even those readers familiar with The Art of War will experience it anew, finding it more fascinating and more relevant than ever.

Notice to our customers about The Art of War