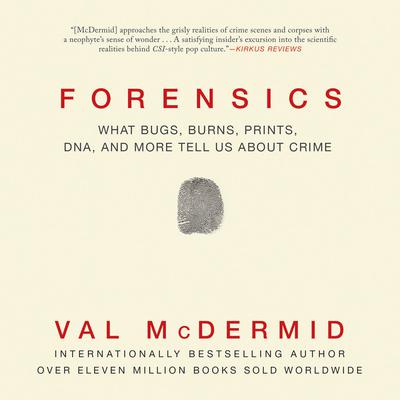 What Bugs, Burns, Prints, DNA, and More Tell Us about Crime

Val McDermid is one of the finest crime writers we have, whose novels have captivated millions of listeners worldwide with their riveting narratives of characters who solve complex crimes and confront unimaginable evil. In the course of researching her bestselling novels, McDermid has become familiar with ever branch of forensics, and now she uncovers the history of this science, real-world murders, and the people who must solve them. The dead talk—to the right listener. They can tell us about themselves: where they came from, how they lived, how they died, and, of course, who killed them. Forensic scientists can unlock the mysteries of the past and help serve justice using the messages left by a corpse, a crime scene, or the faintest human traces. Forensics draws on interviews with some of these top-level professionals, groundbreaking research, and Val McDermid's own original interviews and firsthand experience on scene with top forensic scientist.

Along the way, McDermid discovers how maggots collected from a corpse can help determine one's time of death; how a DNA trace a millionth the size of a grain of salt can be used to convict a killer; and how a team of young Argentine scientists led by a maverick American anthropologist were able to uncover the victims of a genocide. It's a journey that will take McDermid to war zones, fire scenes, and autopsy suites, and bring her into contact with both extraordinary bravery and wickedness, as she traces the history of forensics for its earliest beginnings to the cutting-edge science of the modern day.

A former journalist and Northern Bureau Chief of a national UK tabloid, Val McDermid is the bestselling author of The Skeleton Road and twenty-eight previous novels, three story collections, and the nonfiction book A Suitable Job for a Woman, an inside look at female private investigators. She lives in Scotland.