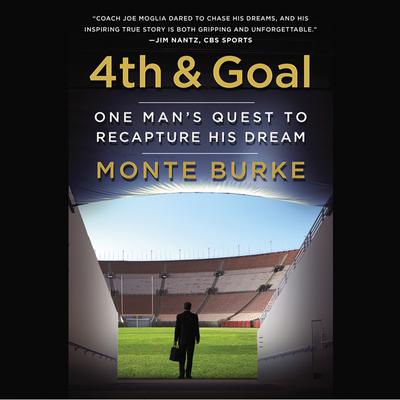 One Man's Quest to Recapture His Dream

This is a true story.

As a kid growing up in a rough-and-tumble neighborhood in New York City, Joe Moglia dreamed of someday becoming the head coach of a college football team-not of becoming a corporate titan.

But sometimes, life gets in the way of our dreams. By the time Joe was in his early 30s, he had risen through the high school and college football ranks to become the defensive coordinator at Dartmouth. His dream was very much within reach. Problem was, Joe wasn't making enough money to support his growing family. Faced with the hard choice between chasing his lifelong dream and supporting his wife and four young kids, Joe did the honorable thing: He walked away from football and went to Wall Street to try to find a job that would foot the bills at home.

Joe had no training in finance. He had no MBA. His resume reflected his coaching accomplishments and his teaching jobs. And yet, somehow, through grit and determination, he was able to land an entry-level position at Merrill Lynch.

Fast forward 25 years later. Joe had reached the business world's mountaintop. He was the CEO of TD Ameritrade, one of the country's most successful financial firms. He was recognized as one of the most respected corporate chiefs in America.

But over all those years, Joe never shook his passion for coaching football. In 2008, he made a fateful and stunning decision: He voluntarily walked away from his high-paying corporate job to do the one thing he'd left undone in his life. He decided to pursue his original passion for becoming a college football head coach.

Getting hired as a college coach proved incredibly difficult. College athletic directors told him it was an impossible feat. He'd been out of football for nearly three decades. Undaunted, and at age 60, Joe became an unpaid intern with the University of Nebraska's football team in 2009 and 2010. In 2011, he was named the head coach of the Omaha Nighthawks of the United Football League, a professional league teetering on the brink of financial collapse. It was a risky proposition, but one he felt he needed to take to prove to his naysayers that he could coach a college team. Failure would mean the death of a dream that refused to die.

As told by Forbes writer, Monte Burke, 4th And Goal is a detailed account of Joe Moglia's amazing and uplifting life story, his quest for his ultimate dream and its stunning conclusion. It's a tale of overcoming adversity...of never giving up...of never losing sight of one's true goals in life.

It is a story, quite literally, of a dream deferred, but never forgotten.