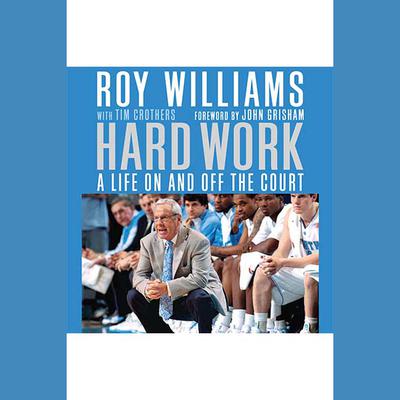 A Life On and Off the Court

Roy Williams, head coach of the University of North Carolina men’s basketball team, the Tar Heels, has the highest winning percentage in NCAA history. Over the last seven years, the 58-year-old Asheville, N.C., native—who was inducted into the Hall of Fame in 2007—has won 205 games, including 24 in the NCAA Tournament. That’s more Final Fours, more wins, and more NCAA Tournament victories than any basketball coach in the nation.

Hard Work tells the story of Roy Williams’ life that few people know, in Williams’ own distinct and colorful way—his troubled upbringing, his college years, his years of trying to make ends meet before becoming a head coach. It reveals how determination took him from an impoverished home in the mountains of North Carolina to the very pinnacle of coaching success, culminating in the 2009 NCAA National Championship (his second in five years). And it pulls back the curtain on one of college basketball’s most guarded programs as witnessed by one of the most successful, dominant coaches, at the prime of his power.

Coach Williams describes himself as the most competitive person on earth, admitting that he once got into a game of pool with Michael Jordan that nearly ended in a fistfight. In addition to providing a fresh look at Jordan, Hard Work will chronicle Williams’ connection with such basketball luminaries as Paul Pierce, Kirk Hinrich, Jacque Vaughn, Phil Ford, James Worthy, Sam Perkins, Sean May, and Rashad McCants, along with Tyler Hansbrough and Ty Lawson, all of whom Williams credits with having earned him the highest winning percentage in NCAA history.

Hard Work is an inspirational story of what can be achieve by  anyone who commits to a dream.