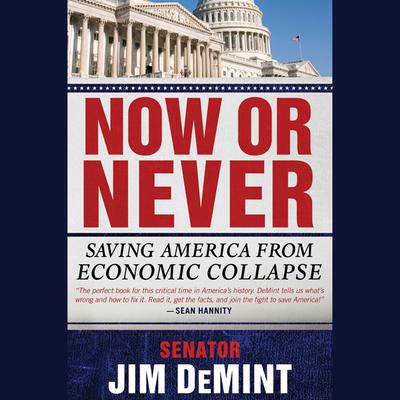 
America is at more than just a crossroads. She is at the brink. A future of freedom and prosperity can still be had should Americans show the will to chart such a path. But simply continuing with business as usual has literally brought us to the edge of destruction.

In NOW OR NEVER, Senator DeMint stresses that the current political moment of widespread concern about massive debt and reckless spending is our last chance to rescue America from economic armageddon. This audiobook is an invaluable tool which will enlighten voters to the current state of our union in order to help them make the best choices in the upcoming presidential election. Continuing the momentum of the Tea Parties and rallies that demanded a new breed of representatives in the 2010 elections, Senator DeMint reminds us of the importance of citizen activism, and its power to change Washington in this critical moment in our nation's history.