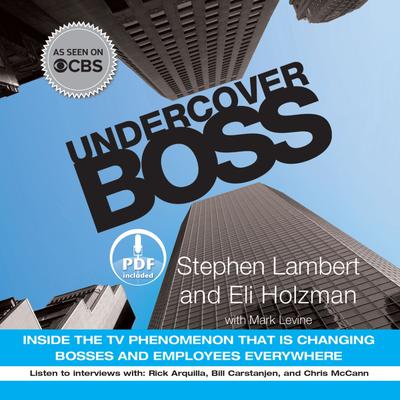 Inside the TV Phenomenon that is Changing Bosses and Employees Everywhere

On February 7, 2010, the CBS television series Undercover Boss premiered to a staggering 38.6 million viewers, the largest post–Super Bowl audience for a new series and the most-watched premiere episode of any reality series in the history of television. Since that time, Undercover Boss has been the subject of much debate and discussion. Now, for the first time, the bosses and employees featured on Undercover Boss share the lessons they learned as well as the formative experiences that resulted from being on the show. Show creators and executive producers Stephen Lambert and Eli Holzman reveal how they came up with the idea for the show, how they got a major network on board, and of course, how they found a dynamic, charismatic group of bosses willing to go undercover—on camera—in this thoroughly new experiment. Featured brave bosses and companies include: Waste Management - Larry O’Donnell, President and COO - Hooters of America - Coby Brooks, President and CEO - 7-Eleven - Joe DePinto, President and CEO - White Castle - Dave Rife, Owner - Churchhill Downs - Bill Carstanjen, COO - GSI Commerce - Michael Rubin, Founder and CEO - Herschend Family Entertainment - Joel Manby, President and CEO - Roto-Rooter - Rick Arquilla, President and COO - 1–800-FLOWERS - Chris McCann, President and COO. Featuring all-new interviews with the bosses and employees of the nine businesses featured on Season 1 of the show, as well as producers’ notes on what you didn’t see behind the scenes, this audio is a must-have for fans of the show everywhere.