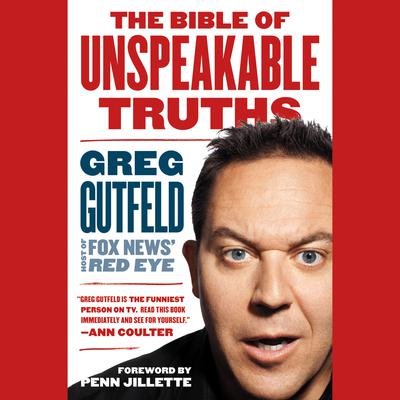 The Bible of Unspeakable Truths

Renowned fake conservative pundit Stephen Colbert may have coined the word truthiness, but it's Greg Gutfeld, real conservative political pundit and host of the Fox News Channel's Red Eye, who has made a name for himself by unabashedly pronouncing the actual uncomfortable truthiness of life that is sure to shock the P.C. THE BIBLE OF UNSPEAKABLE TRUTHS is packed full of his most aggressive (and hilarious) rants, with each chapter devoted to a single "unspeakable truth." For example, in one chapter he might be ranting that "liberals are the least liberal minded people you know," and in the next, "you aren't racist if you make fun of poor whites." There might even be charts and diagrams as well.

Though Gutfeld is best known for his "straight-from-the-gut" political commentary, as featured every night on Red Eye as well as his blog, The Daily Gut, this book will go well beyond politics, exploring pop culture, current events, and nearly every other aspect of life, such as "if house cats were your size, they would eat you without a second thought," "PETA would never march for a vulture," "the media wanted bird flu to kill thousands," "attractive people don't write for a living," and "Ethan Hawke is a rodent."

With an irreverent voice, sharp wit, and a take on nearly everything, this "manual about how to think about things, for people equipped to think about things" will be one that listeners either love wholeheartedly, or love to hate -- and will guarantee to entertain and amuse anyone who's ever been afraid to say what they really thought. As Greg says, "In the end, this book should make you nod your head a lot, and laugh more. If it doesn't then you should probably seek medical help. I did. And I am the better for it!"