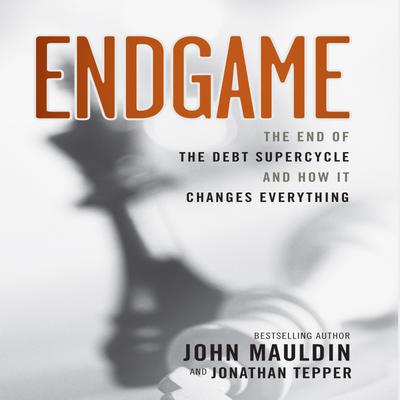 The End of The Best Supercycle And How It Changes Everything

"We all know we have seen the end of an era, and now we have courtside seats to watch the Endgame unfold. We are watching the end of Act I: The Debt Supercycle. Now we will get to see how Act II: The Endgame plays out."—John Mauldin & Jonathan Tepper (Chapter 1) Hundreds of books have been written about the financial crisis that engulfed the world after Lehman Brothers went bankrupt. But what if the bigger financial crisis is ahead of us, not behind us? As John Mauldin and Jonathan Tepper deftly illustrate in this controversial audio book, the crisis was more than a half-century in the making. The Great Financial Crisis, however, was merely Act I. Act II has now begun. The massive household deleveraging and historic shift of private debt onto government balance sheets now underway all over the world represents the end of a sixty-year global Debt Supercycle. We have now entered the Endgame, a time when bankruptcies and defaults (disguised as "restructuring") will not be of households and companies but of governments. The stakes are now higher. The coming crises will offer policymakers few good choices and many bad ones. It will require extraordinary clarity and courage from leaders, courage that so far is largely completely lacking. Yet, despite the authors' dark forecast, the message in Endgame is not all gloom and doom. The book lays out positive steps governments can take to weather the worst of the stormy days ahead, minimize the inevitable pain and discomfort most of us can expect to experience, and chart a bold new course to sustained economic growth and prosperity. It also offers investors an abundance of useful analysis and expert advice on how to protect their assets during the worst of it and prosper from the many new opportunities that will emerge globally as they present themselves. In Part 2, the authors take listeners on a country-by-country tour—including the United States, UK, European countries, and Japan—clearly explaining the problems each country faces, as well as the good and bad policy options open to each, and the investment pitfalls and opportunities likely to be found in each national economy. Whether you call it the Great Recession, the Great Financial Crisis, or the Global Debt Crisis, what we are experiencing is unlike anything seen in eighty years. Now is not the time to succumb to panic and superstition. It is a time for courage and intelligent decision making informed by the brand of rational analysis and wisdom you'll find in Endgame.