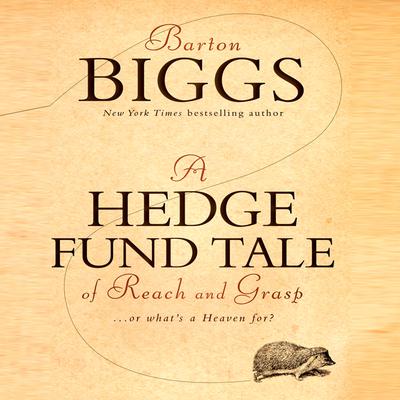 A Hedge Fund Tale of Reach and Grasp

A Hedge Fund Tale of Reach and Grasp recounts the ecstasy and the agony of investors in the hubris-filled years of the great secular bull market and the terrors of the financial collapse. It is a story of personal and investment triumph and tragedy in the tradition of An American Tragedy and Bonfire of the Vanities. Though the tale is fiction, it is faithful to the actual market events of the decade of hedge fund madness and the ensuing destruction in the great bear market of 2007–2009 and its aftermath. In A Hedge Fund Tale of Reach and Grasp, the former top-ranked global strategist for Morgan Stanley, and now a hedge fund manager, expertly weaves fact and fiction to describe how the mysterious world of hedge funds and the people who run them really works. It is the story of how the brilliant but toxic interaction of brains, intensity, raw ambition, hubris, and greed combined with the “perform or perish” creed to fuel the egregious excesses and, eventually, contribute to the bursting of the stock market and financial bubbles. Lifestyles, portfolios, and loves were recklessly leveraged creating stunning excesses, but when the world turned, it wasn’t just proud fortunes that were lost; relationships and souls were ravaged as well. There is a compelling, but tragic, love story here about two people who celebrated love as a solution to spiritual isolation. The novel is also an investment chronicle, a tragic saga of how all brilliant performance is transitory and how, unfortunately, there is no stock market strategy that works forever and that too much money can’t spoil. The protagonist is Joe Hill, an authentic American hedge fund success story if there ever was one, who came from nowhere, reached for heaven, and momentarily grasped it. Joe Hill isn’t the typical Wall Street whiz kid sporting an Ivy League education. Born on the wrong side of the tracks in rural Virginia, Joe had to work for everything he wanted. And he wanted it all. A masterful mix of fact and fiction, A Hedge Fund Tale of Reach and Grasp is the inside, rags-to- riches story of one man’s American dream that became the world’s financial nightmare.