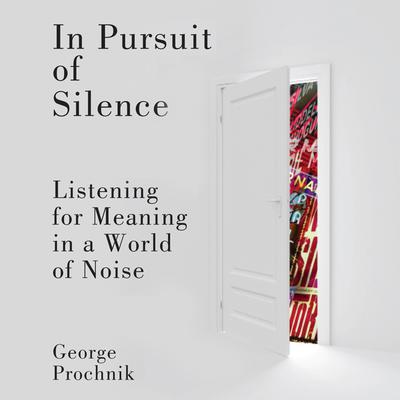 In Pursuit of Silence

Listening for Meaning in a World of Noise

More than money, power, and even happiness, silence has become the most precious—and dwindling—commodity of our modern world. Between iPods, music-blasting restaurants, earsplitting sports stadiums, and endless air and road traffic, the place for quiet in our lives grows smaller by the day. In Pursuit of Silence gives context to our increasingly desperate sense that noise pollution is, in a very real way, an environmental catastrophe. Listening to doctors, neuroscientists, acoustical engineers, monks, activists, educators, marketers, and aggrieved citizens, George Prochnik examines why we began to be so loud as a society, and what it is that gets lost when we can no longer find quiet. He shows us the benefits of decluttering our sonic world. As Prochnik travels across the United States and overseas, we meet a rich host of characters: an idealistic architect who is pioneering a new kind of silent architecture in collaboration with the Deaf community at Gallaudet University; a special operations soldier in Afghanistan (and former guitarist with Nirvana) who places silence at the heart of survival in war; a sound designer for shopping malls who ensures that the stores we visit never stop their auditory seductions; and a group of commuters who successfully revolted against piped-in music in Grand Central Station. A brilliant, far-reaching exploration of the frontiers of noise and silence, and the growing war between them, In Pursuit of Silence is an important book that will appeal to fans of Michael Pollan and Daniel Gilbert.