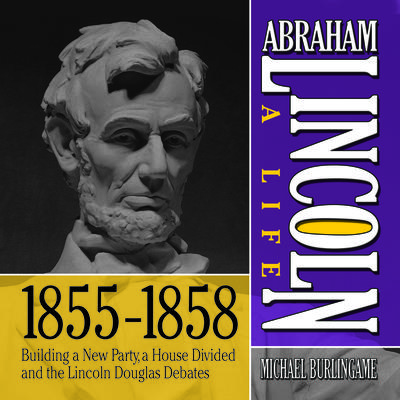 Building a New Party, a House Divided and the Lincoln Douglas Debates

Publishers Weekly describes this book as “the most meticulously researched Lincoln biography ever written. Burlingame's Lincoln comes alive as the author unfolds vast amounts of new research while breathing new life into familiar stories. It is the essential title for the bicentennial.” Publishers Weekly also notes, “The book need not be heard in one sitting. Each part stands alone.” Now Gildan Media brings to you, chapter by chapter, what Doris Kearns Goodwin calls a “…profound and masterful portrait.” Building a New Party, a House Divided and the Lincoln Douglas Debates ( 1855-1858) “Unite With Us and Help Us to Triumph” – Building the Illinois Republican Party ( 1855-1857) Lincoln struggles to form a new party to take the place of the defunct Whig party. He has strong doubts that a peaceful end to slavery is possible. Joining with anti-slavery, anti-nativist forces, Lincoln launches the Republican Party of Illinois and the first Republican convention takes place. Supporting a non-radical anti-slavery platform Lincoln intervenes between radicals and conservatives to settle disputes at the convention. When the Dred Scott case is decided, Lincoln publicly denounces the court decision. His finest debates with Stephen A. Douglass take place and Lincoln calls into question the hypocrisy of the Southern disgust of race mixing, as the population of Southern mulattos “dwarfed” that of the north. “A House Divided” Lincoln vs. Douglass (1857-1858) Stephen Douglass vies for Republican support and begins to deny his affiliations with Democrats, stating that he had planned to curtail the spread of slavery geographically by building a railroad. Yet as late as 1858, Douglass wrote often of his belief, which had historical precedent, that blacks were not self-governing citizens and could not be granted passports. Lincoln saw him as a threat in that Douglas’ views were able to win Republicans and at the same time woo Democrats. During this time, Lincoln delivers his famous “house divided” speech in which he claims that slavery must either exist or cease to exist in all territories. “A David Greater than the Democratic Goliath” –the Lincoln-Douglas Debates 1858 Despite Douglass being more popular than Lincoln, he lost many supporters due to strong and growing anti-slavery sentiments, a dwindling support from the Whig party, and a general dissatisfaction with the Democrat party. Douglass arrived well dressed for the debates with horse-drawn carriages and bands, whereas Lincoln would arrive quietly by train, and in very shabby clothing. Douglass often took to misquoting and lying, which local newspapers noted, sparking harsh criticism of him. The press also purposefully published inaccurate transcriptions of Lincoln’s speeches. Democratic election fraud was largely at play as Republicans failed to gain control of the legislature although the Republican popular vote was larger than it had been in 1856.