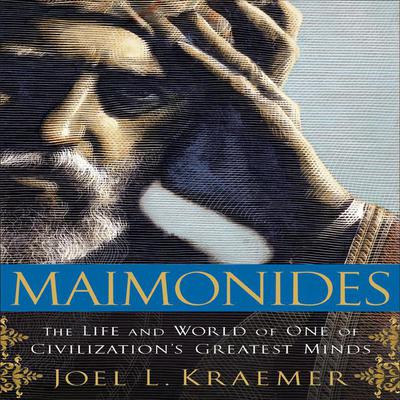 The Life and World of One of Civilization's Greatest Minds

The first definitive biography of Moses Maimonides, one of the most influential intellects in all of human history, illuminates his life as a philosopher, physician, and lawgiver. Recalling such bestsellers as David McCullough’s John Adams and Walter Isaacson’s Einstein, MAIMONIDES is a biography on a grand scale, brilliantly explicating one man’s life against the background of his time. As a physician, Maimonides is associated with Hippocrates as a founder of modern medicine; his influence in philosophy is equal to that of Plato, Aristotle, Spinoza, and Kant; in religion, he is as significant as Moses, Martin Luther, and Saint Augustine; and as a lawgiver, he has been recognized by the United States Congress as one of the greatest alongside Hammurabi and Thomas Jefferson. Now, in a dazzling work of scholarship, Joel Kraemer tells the complete story of Maimonides’s rich life. Maimonides is at once a portrait of a great historical figure and an excursion into the Mediterranean world of the twelfth century. Joel Kraemer draws on a wealth of original sources to re-create a remarkable period in history when Jewish, Christian, and Muslim traditions clashed and mingled in a setting alive with intense intellectual exchange and religious conflict. Born in Muslim-ruled Spain in 1135, Moses Maimonides was deeply conversant with Arabic philosophy and literature. By the time he was thirty, he was known for his seminal works on the Jewish practices and law. In Egypt, his training as a physician earned him a place in the entourage of the great Sultan Saladin, and his books earned him respect and influenced generations of Christian, Muslim and Jewish thinkers.