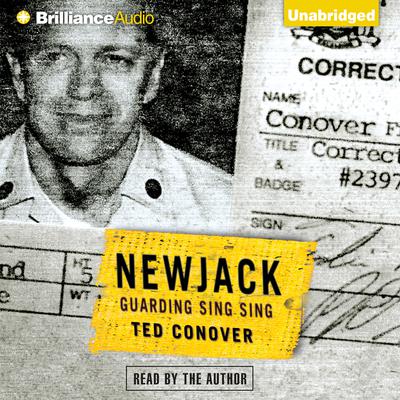 Newjack: Guarding Sing Sing is the story of Conover's rookie year as a guard at Sing Sing. It is a nerve-jangling account of his passage into the storied prison and the culture of its guards—both fresh-faced "newjacks" like Conover and brutally hardened veterans. As he struggles to be a good officer, Conover angers inmates, dodges blows, works to balance decency with toughness, and participates in prison rituals—strip frisks, cell searches, cell "extractions"—that exact a toll on inmates and officers alike.

The tale begins with the corrections academy and ends with the flames and smoke of New Year's Eve on Conover's floor of the notorious B-Block. Along the way, Conover also recounts the history of Sing Sing, from draconian early punishment, to fame as the citadel of capital punishment, to its present status as New York State's "bottom of the barrel" prison.

This audiobook will become a landmark of American journalism—the definitive presentation of the impasse between the need to imprison criminals and the dehumanization of inmates and guards—that almost inevitably takes place behind bars.

"Newjack is an astonishing work by a gifted—and dedicated—journalist. Ted Conover takes us into the dangerous, sad, amusing and instructive soul of one of America's best known prisons." —Tom Brokaw