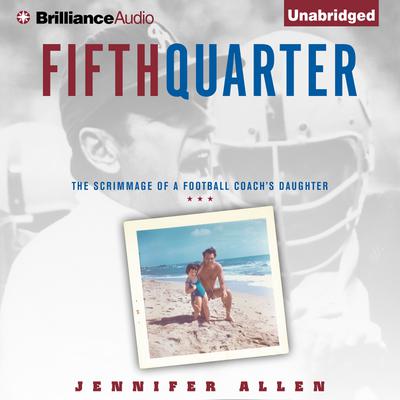 The Scrimmage of a Football Coach's Daughter

George Allen was a top-ranked NFL coach throughout the 1960s and 1970s, coaching in turn the Chicago Bears, the Los Angeles Rams, and the Washington Redskins. Raised in a home dominated by her three football obsessed older brothers and her father's relentless schedule, the author came of age in a cauldron of testosterone and a win-at-all-costs mentality.

While the household was buffeted by the coach's tumultuous firings and hirings, which periodically propelled the family to a new city, Jennifer dreamed of being the first female quarterback in the NFL. But as she grew, she yearned mostly to be someone that her father would notice. In a world where only football mattered, what could she strive for, who could she become?

Allen has written a memoir of the father she tried so hard to know, the family life that was wistfully sacrificed to his endless, fanatical pursuit of the Super Bowl. What emerges is a fascinating and singular behind-the-scenes look at professional football and a memorable, bittersweet portrait of a father and his daughter, told by an accomplished and assured writer.