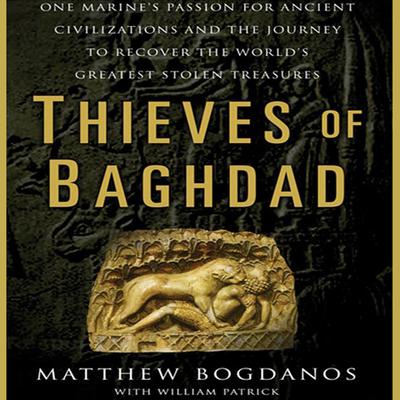 One Marine's Passion for Ancient Civilizations and the Journey to Recover the World's Greatest Stolen Treasures.

A blend of treasure hunt, police procedural, war-time thriller, and exposé of the international black-market in stolen art, told in the voice of a truly remarkable man: a soldier, a father, and a scholar.

The New York tabloids call him ‘the pit bull' for his relentless prosecution of high-profile defendants. He's an assistant D.A., a spit-and-polish Marine, a trigger-puller on counter-terrorist missions to Afghanistan, a competitive boxer—and a dedicated classics scholar. So when Matthew Bogdanos discovered that the Iraq National Museum had been looted during the battle of Baghdad, he immediately embarked on a mission to recover the stolen antiquities. Accompanied by a select group of men, Bogdanos set off across the desert without official sanction, risking his career and his life in pursuit of this priceless international treasure.

THIEVES OF BAGHDAD immerses the listener into the rich culture, the colorful characters, the double-dealing, and the derring-do, to sort out once and for all what actually happened during the chaos of the Baghdad invasion, exactly how the thefts took place, and how the most notable objects were retrieved. We hear Bogdanos and his team going on raids and negotiating recoveries, blowing open safes, and mingling in the marketplaces—often encountering an assortment of rogues and villains. He gradually earns the trust of Iraqis eager to preserve their cultural heritage—and then stuns the world by unearthing the most sensational treasure of all, The Gold of Nimrud over 1,000 pieces of gold jewelry, precious stones, and ornaments often called "Iraq's Crown Jewels."