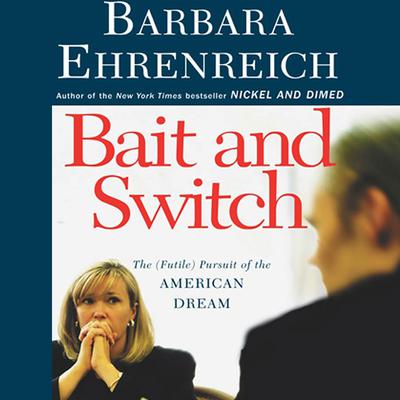 The (Futile) Pursuit of the American Dream

The bestselling author of Nickel and Dimed goes back undercover to do for America's ailing middle class what she did for the working poor.

Barbara Ehrenreich's Nickel and Dimed explored the lives of low-wage workers. Now, in BAIT AND SWITCH, she enters another hidden realm of the economy—the world of the white-collar unemployed. Armed with a plausible resume of a professional "in transition," attempts to land a "middle class job" undergoing career coaching and personality testing, then begins trawling a series of EST-like "boot camps," job fairs, "networking events," and evangelical job-search "ministries." She gets an "image makeover" to prepare her for the corporate world and works hard to project the "winning attitude" recommended for a successful job search. She is proselytized, scammed, lectured and, again and again, rejected.

BAIT AND SWITCH highlights the people who've done everything right—gotten college degrees, developed marketable skills, and built up impressive resumes—yet have become repeatedly vulnerable to financial disaster and not simply due to the vagaries of the business cycle. Today's ultra-lean corporations take pride in shedding their "surplus" employees—plunging them, for months or years at a stretch, into the twilight zone of white-collar unemployment, where job-searching becomes a full-time job in itself. As Ehrenreich discovers, there are few social supports for the new disposable workers—and little security even for those who have jobs.

Like the now classic Nickel and Dimed, BAIT AND SWITCH is alternately hilarious and tragic, a searing expose of economic cruelty where we least expect it.