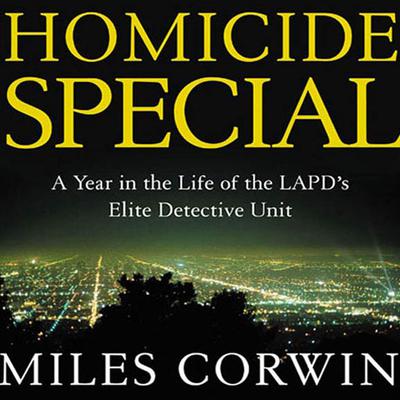 A Year in the Life of the LAPD's Elite Detective Unit

A riveting, behind-the-scenes look at one of the most elite, highly trained units of homicide detectives in the country

Los Angeles is a town of dreamers--and of those who prey on them. The scene of innumerable bizarre crimes, it is also home to a unique police unit called Homicide Special, whose mandate is to take on the toughest, most controversial, and highest-profile cases. Now acclaimed writer Miles Corwin uses his unprecedented access to this legendary unit to portray six of its cases--and capture its newest generation at work.

When a call girl from Kiev dies in the line of duty, detectives Chuck Knolls and Brian McCartin seek her killer among a circle of Russian women who have been sold unwittingly into white slavery. When a gangster's daughter, brought up in Las Vegas, takes a bullet, veterans Jerry Stephens and Paul Coulter trace clues scattered across the country to one of Manhattan's wealthiest real estate magnates. A cold case is reopened; a suspicious mother-daughter drowning and a baffling rape/murder case are solved. And finally, Corwin re-creates the investigation surrounding the late Bonny Lee Bakley--a woman driven, like her city, by the desire for fame--who was allegedly murdered by her actor-husband, Robert Blake.

Compulsively readable, artfully written, and surprisingly redemptive, Homicide Special offers a thrilling insider's report on some of the nation's most high-profile and complex homicides--and the extraordinary men who solve them.