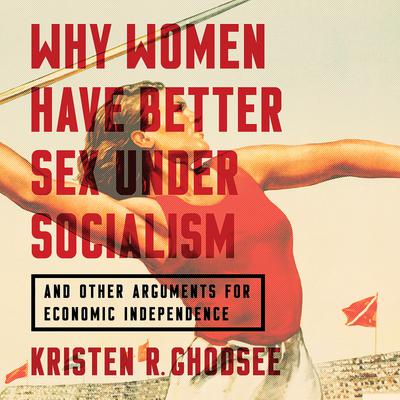 Why Women Have Better Sex Under Socialism

And Other Arguments for Economic Independence

Why Women Have Better Sex Under Socialism

“In Why Women Have Better Sex Under Socialism, Ghodsee argues that unregulated capitalism is bad for women, as well as for everyone else. It goes on to argue that by nature capitalism forces a transactional relationship with sex and relationships between men and women. However, if we were to implement some of the gender equalizing policies of socialism such as government healthcare, childcare, schooling, and parental leave, men and women would be starting their romantic and sexual relationships from an equal footing, and as a result lead more happy and fulfilling lives both inside and outside of the bedroom. This book makes a compelling case for studying and implementing the positive aspects of the socialism of the past, so we can have a better future. By no means a manifesto, or apologetics for state socialism, but a call to take a deeper look at what the socialist countries of the past got right, and perhaps a suggestion not to throw the baby out with the bathwater, to look at what actually worked and benefited the citizens of those nations.”

A spirited, deeply researched exploration of why capitalism is bad for women and how, when done right, socialism leads to economic independence, better labor conditions, better work-life balance and, yes, even better sex.
In a witty, irreverent op-ed piece that went viral, Kristen Ghodsee argued that women had better sex under socialism. The response was tremendous -- clearly she articulated something many women had sensed for years: the problem is with capitalism, not with us.

Ghodsee, an acclaimed ethnographer and professor of Russian and East European Studies, spent years researching what happened to women in countries that transitioned from state socialism to capitalism. She argues here that unregulated capitalism disproportionately harms women, and that we should learn from the past. By rejecting the bad and salvaging the good, we can adapt some socialist ideas to the 21st century and improve our lives.

She tackles all aspects of a woman's life - work, parenting, sex and relationships, citizenship, and leadership. In a chapter called "Women: Like Men, But Cheaper," she talks about women in the workplace, discussing everything from the wage gap to harassment and discrimination. In "What To Expect When You're Expecting Exploitation," she addresses motherhood and how "having it all" is impossible under capitalism.

Women are standing up for themselves like never before, from the increase in the number of women running for office to the women's march to the long-overdue public outcry against sexual harassment. Interest in socialism is also on the rise - whether it's the popularity of Bernie Sanders or the skyrocketing membership numbers of the Democratic Socialists of America. It's become increasingly clear to women that capitalism isn't working for us, and Ghodsee is the informed, lively guide who can show us the way forward.